Oakland Fire Department responded to a two-alarm condo complex fire on the waterfront near Jack London Square Friday night. KTVU's Jana Katsuyama reports there were no injuries and the cause is under investigation.

OAKLAND, Calif. - An entire Oakland condominium complex near Jack London Square was evacuated Friday night as flames erupted from one of the units.

The two-alarm fire was at the Portobello Condo complex, right next door to the KTVU studios along the Embarcadero.

Fire crews say they got the call at 7:58 p.m. When firefighters arrived they saw flames spreading up from the second floor to the third floor of the building. Firefighters rushed into the building to make sure no one was inside. They also put up a ladder to try and knock out the fire from above and prevent it from spreading.

"I heard people running and then I heard the alarm going off so I was just scrambling to get the cats and come out here," said Dennis Nicolas, a resident who was waiting outside with his two cats.

"We thought we could try and get to our unit to see if it's okay and we found out it was the unit right before ours and there was a lot of smoke and firemen were running around," Chris Srichankij, who had been out to dinner and arrived as the fire was burning. 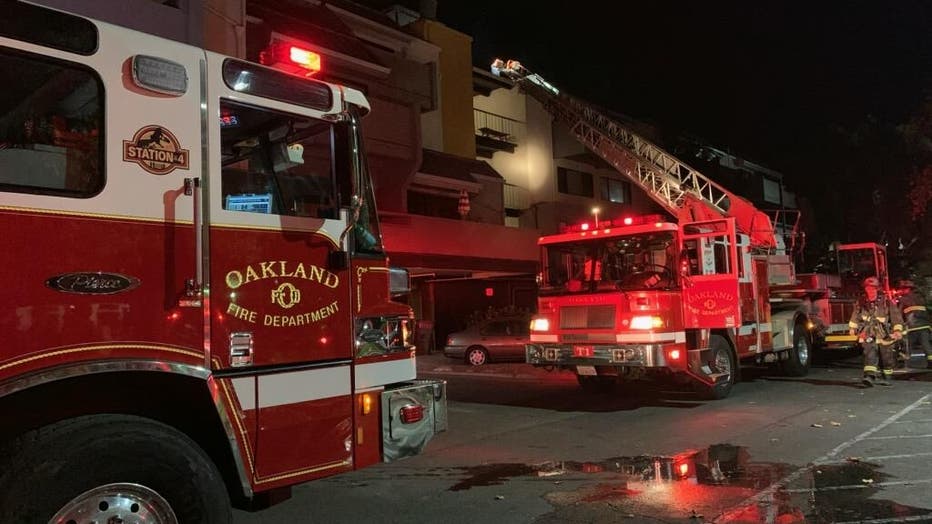 Oakland Fire Department at the scene of a 2-alarm fire near the waterfront at Jack London Square.

"They drilled from the roof and tried foam and that didn't seem work so they put water on it and had the fire out," said Rory Dean-Evans, a Portobello Board member.

Oakland Fire Battallion Chief Zoraida Diaz says fortunately no one was injured and it seems everyone heeded the fire alarms and got out quickly. She says the smoke was so bad, though, people in one of the units next to the fire had to shelter there until fire crews could clear the way.

"We had the majority of occupants, they self-extricated. They removed themselves from the building. We did have one unit which is adjacent to the fire unit, where we had a company advise them to shelter in place," said Chief Diaz.

They chief says a group of students from U.C. Berkeley were having a sorority event at the adjacent Eve's restaurant and called in the fire. One resident says he was thankful that some of the students were in a car and drove through the parking lot next to the building, yelling to the residents and alerting them to the fire.

The chief says two people were living in the unit. Red cross has been called to help them.

Fire investigators are still looking into the cause of the fire. 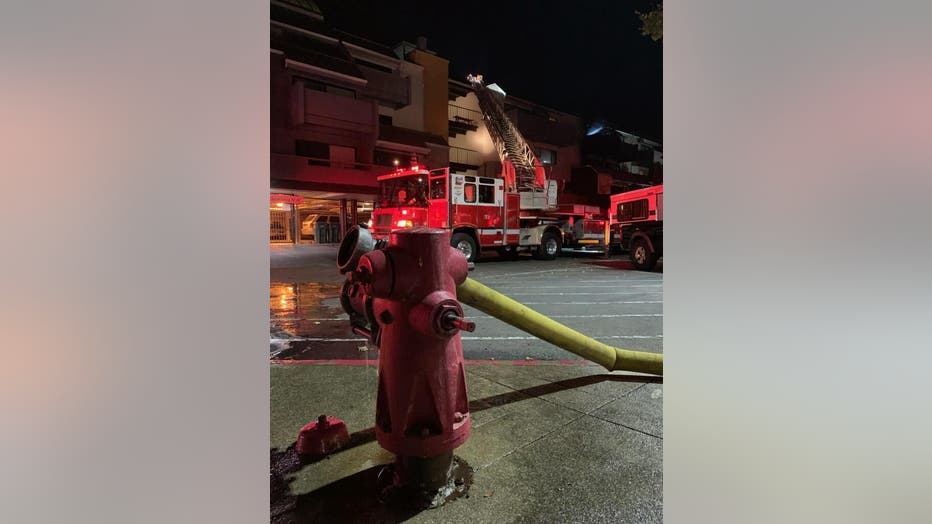 Oakland Fire Department at the scene of a 2-alarm fire near the waterfront at Jack London Square.

KTVU's Andre Senior shared a video of the flames on social media just before an official crew made their way to the scene.

Others shared images from their vantage point of the flames with the station.