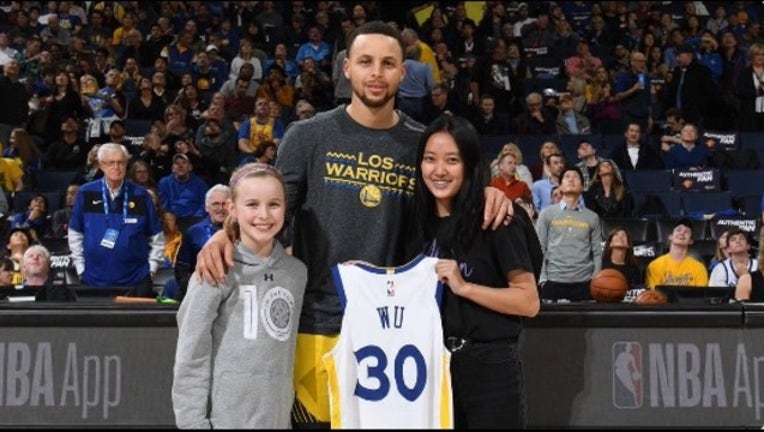 Vivian Wu (right) is the recipient of a scholarship awarded by the Curry foundation. It was inspired by nine-year-old Riley Morrison (left), who wrote Curry a letter asking why his signature shoe wasn't available in girl sizes.

OAKLAND, Calif. (BCN) - An Oakland Tech High School senior is the inaugural recipient of a $30,000 scholarship awarded by The Stephen & Ayesha Curry Family Foundation to college-bound female students from the Bay Area.

The scholarship, which was awarded to Vivian Wu before Friday night's Golden State Warriors basketball game, was inspired by 9-year-old Riley Morrison, who wrote the Warriors star a letter in November asking why his namesake Under Armour shoes weren't available for girls on the Under Armour website. Curry responded to Riley's inquiry vowing to address the issue and has since partnered with her on a new sneaker in which Riley designed the sock liner featuring two girls playing basketball.

Proceeds from sales of the shoe will fund the annual scholarship to a student "who has shown an aptitude for overcoming adversity, catalyzing change within her community and demonstrating excellence in a STEM-related field of study."

Wu has a 4.2 grade point average and has completed 300-plus hours of community service as an advocate for marginalized communities, including survivors of domestic violence, the foundation said on Twitter.