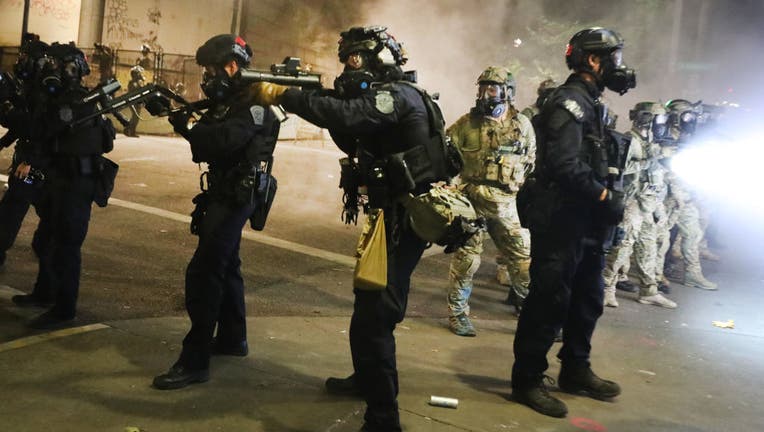 FILE - Federal police face off with protesters in front of the Mark O. Hatfield federal courthouse in downtown Portland as the city experiences another night of unrest. (Spencer Platt/Getty Images)

The cities of Oakland and Portland, Oregon have sued the U.S. Department of Homeland Security and the Justice Department, alleging that the agencies are overstepping constitutional limits in their use of federal law enforcement officers to tamp down on protests.

The use of federal agents in these ways is a major shift in policy and threatens the independence of local law enforcement, according to the lawsuit. The complaint cites the anti-commandeering doctrine of the Tenth Amendment, which says that the federal government cannot require states or state officials to adopt or enforce federal law.

The Justice Department and the Department of Homeland Security did not immediately respond to requests for comment Thursday. In the past, acting DHS secretary Chad Wolf has been a vocal defender of the administration’s response to the civil unrest in Portland

The Trump administration says the work of the federal agents is limited to federal property but “the activities in cities such as Portland instead reveal a distinct and meaningful policy shift to use federal enforcement to unilaterally step in and replace local law enforcement departments that do not subscribe to the President's view of domestic ‘law and order.’"

The allegations of constitutional overreach focus on the federal government’s actions in Portland but Oakland joined the lawsuit because of concerns that the Trump administration might send U.S. agents to Oakland or deputize police officers there as well, court papers show.

Protests over racial injustice and police brutality have roiled both U.S. West cities since the death of George Floyd and drawn attacks from President Donald Trump, who threatened to send federal resources to restore law and order.

In Portland, the Trump administration sent dozens of U.S. agents to the city in July to guard a federal courthouse that had become a target of protesters, but those agents clashed with protesters blocks from the courthouse on several occasions. The state of Oregon sued over allegations that federal agents swept up protesters in unmarked cars without identifying themselves.

U.S. Attorney for Oregon Billy J. Williams said in late September that more than 80 people had been charged with federal crimes related to the protests.

Last month, Portland agreed to have about five dozen of its police officers deputized as federal agents by the Marshals Service in advance of a rally planned in the city by the right-wing group Proud Boys. The city anticipated potential clashes between left- and right-wing protesters. Troopers from the Oregon State Police and a local sheriff's department were also deputized.

City leaders have since said that they believed the police officers would only be federally deputized for that weekend and sought to cancel the agreement after the rally was over. But the U.S. Attorney for Oregon and the Marshals Service have refused to cancel the deputization, which officially expires on Dec. 31.

The lawsuit also alleges that the U.S. government has illegally erected a fence around the Mark O. Hatfield Courthouse, which is federal property, against the city’s wishes. The fence blocks a major bike thoroughfare that is city property, according to Portland officials.