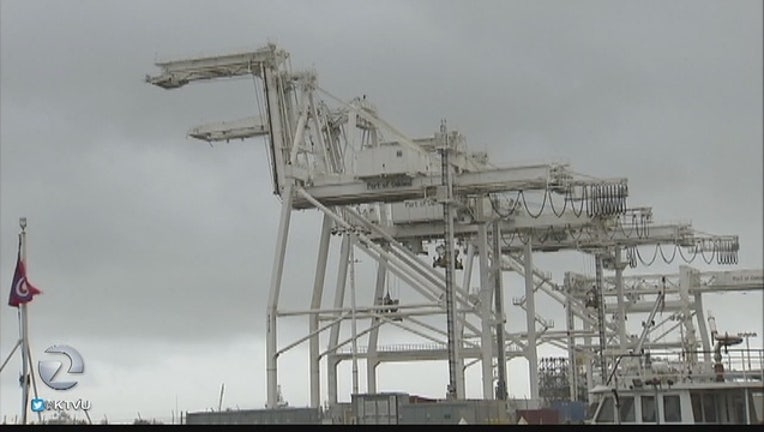 OAKLAND, Calif. (KTVU) - The operator of the Port of Oakland's second-largest terminal filed for bankruptcy on Monday less than two weeks after it suddenly announced ceasing operations about seven years into a 50-year lease.

Ports America announced on Jan. 19 it would wind down operations at the port's Outer Harbor terminal over the next 90 days, saying it wanted to concentrate on other West Coast ports.

But in court filings today as Ports America filed for Chapter 11 bankruptcy protection, the company said it has been operating at a loss for years in Oakland and is expecting to have difficulty immediately paying its utility bills as it winds down its operations, estimated to be about $221,500 per month.

For now, Ports America remains in the facility, still owes rent to the port and there is cleanup that needs to be done before it leaves Outer Harbor for good on March 31, Zampa said.

The Port of Oakland has been left suddenly redirecting cargo from Outer Harbor to the port's other four terminals. While they have the capacity to absorb the excess cargo they will need to make some efficiency
improvements to avoid backups, port spokesman Michael Zampa said today.

"We're still moving very aggressively to redirect all the ships and containers to other terminals in the port," Zampa said. "The goal as we've said all along is that no ships and no cargo leave Oakland."

Whether Ports America's bankruptcy petition would negatively impact that process was not immediately clear, but port officials said they were "disappointed" and that it indicates a lack of cooperation in the transition on the part of Ports America.

"We've been negotiating with them in good faith for a smooth orderly transition that protects the interests of shipping lines, cargo owners and others who depend on the terminal," port executive director Chris Lytle said in a statement. "It's a shame they've taken this step."

Ports America had signed a 50-year lease to operate on the 208-acre facility early in 2009. Most leases at the Port of Oakland last for only 10 or 15 years, but Ports America signed the exceptionally long lease while promising to make improvements to the terminal's infrastructure.

Zampa said the port is now actively looking for a partner who would help modernize equipment at the terminal.

"There was not investment to the degree required to keep that facility up to date or as modern as it could be," Zampa said. "Work needs to be done there and we're looking for a partner who's willing to participate in that."

Zampa said the port has been making good progress in negotiations with potential partners and is open to a wide variety of uses for the land beyond cargo container shipping. The port hopes to announce a new tenant
soon, though future tenants may rent only part of the large property.