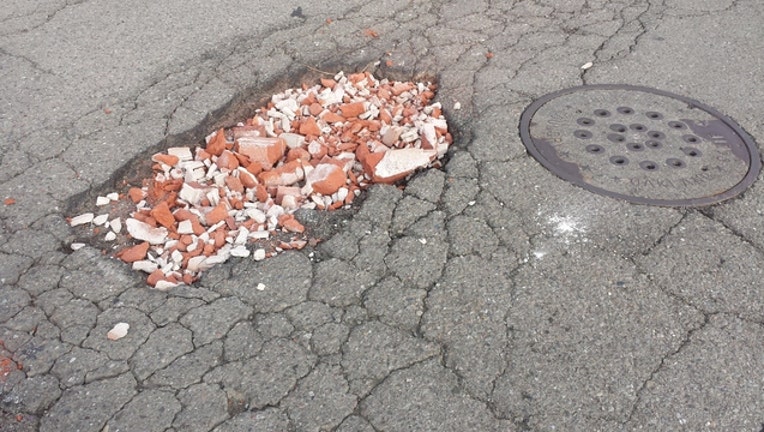 OAKLAND, Calif. - Oakland public works officials are encouraging residents to notify them about streets in need of repair rather than taking matters into their own hands after potholes were found filled with brick fragments in West Oakland on Monday.

The potholes, located on eastbound West Grand Avenue between Market and Adeline streets, have since been filled in properly by city work crews.

Public Works Department spokeswoman Kristine Shaff said the city has not received any other reports of residents filling in potholes around Oakland, but noted that it's illegal for them to do so.

A report released last year by the non-profit transportation research group The Road Information Program found Oakland's roads are among the worst of any major urban area in the U.S. City officials say the backlog
of street repairs needed is estimated at $435 million and growing.

"Yes we have pothole problems, but we have a process for that, which is to report a problem," Shaff said.

There were a few reports of potholes in the area of West Grand and Adeline in the past week but it was unclear whether they were the ones filled in with brick fragments.

Shaff said the brick-filled potholes serve as "a great example of what should not be done" since the pieces could fly up and hit other cars, bicyclists or pedestrians.

Someone trying to fill in a pothole without the proper safety precautions could also get hit by passing traffic, Shaff said.

Any potholes or other non-emergency problems such as illegal dumping or graffiti can be reported by calling (510) 615-5566, emailing opwcallcenter@oaklandnet.com, visiting a website at http://www.seeclickfix.com/oakland or using the free SeeClickFix smartphone app, Shaff said.

A pothole posing a potential safety hazard should be noted as such in any report to the city, she said.

"We will put that as a priority and go deal with it right away. There are definitely potholes that are worse than others," she said. "We really value the eyes and ears in the community."

Shaff said residents looking to help improve Oakland streets can join volunteer programs such as Adopt a Storm Drain, in which people pledge to keep their nearby storm drain clear of debris to reduce flooding and
pollution.

The city has more than 7,500 storm drains and "there's no way our crews can get to all of them," she said.

People can sign up for the program at http://www.adoptadrainoakland.com and become eligible for city tools and
supplies.