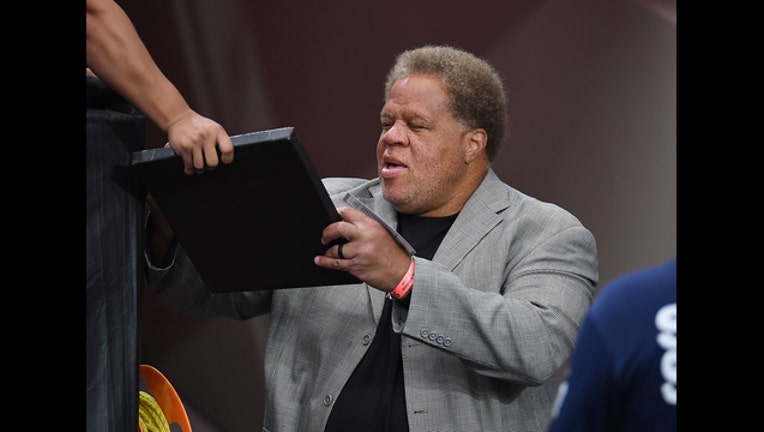 GLENDALE, AZ - NOVEMBER 18: General Manager Reggie McKenzie of the Oakland Raiders signs autographs prior to a game against the Arizona Cardinals at State Farm Stadium on November 18, 2018 in Glendale, Arizona. (Photo by Norm Hall/Getty Images)

ALAMEDA, Calif. (AP) - The Oakland Raiders fired general manager Reggie McKenzie on Monday, less than two years after he was named the NFL's executive of the year.

A person familiar with the move says McKenzie was let go from the position he had held for almost seven seasons a day after Oakland beat Pittsburgh 24-21 for its third win of the season. The person spoke on condition of anonymity because the team has not made an announcement. The NFL Network first reported the firing.

McKenzie's status was in doubt ever since coach Jon Gruden was given a 10-year contract last January to take charge of the football operation for the Raiders. McKenzie's influence had waned since then, with the Raiders cutting ties with several of the players he had acquired, most notably edge rusher Khalil Mack and receiver Amari Cooper.

McKenzie was the first major hire made by owner Mark Davis after he took over the team following the death of his father, Al, in 2011. McKenzie modernized the franchise, got the team out of salary cap purgatory, and built a roster that won 12 games under coach Jack Del Rio in 2016, earning him honors as the league's top executive.

But the Raiders slumped to a 6-10 record last season, leading Davis to fire Del Rio and get Gruden to take the hefty contract after years of courting.

Gruden set out to overhaul the roster, trading away and cutting many of McKenzie's former draft picks. That accelerated a week before the start of the season when Mack was dealt to Chicago for a package including two first-round picks and then Cooper was dealt in October to Dallas for another first-round pick.

With those deals, only nine players drafted by McKenzie from 2012-17 remain on the active roster.

Despite all that, McKenzie downplayed any rift in the relationship that dated back to the 1990s when both worked together in Green Bay.

"Gruden and I, we work together very well," McKenzie said after the Cooper trade. "Let's get no mistakes about him pushing me out. That's not happening. Me not being able to work with Gruden? That's furthest from the truth. OK?"

The highlight of McKenzie's tenure came in the 2014 draft, when he put together the nucleus of Oakland's only playoff team since going to the Super Bowl following the 2002 campaign.

He drafted Mack fourth overall and watched him develop into the 2016 AP NFL Defensive Player of the Year, got quarterback Derek Carr in the second round to end the more than decade-long revolving door at the position, and added several other key players, including guard Gabe Jackson and defensive tackle Justin Ellis later in the draft.

Those players, teamed with an offensive line fortified by free agent signings center Rodney Hudson, guard Kelechi Osemele and tackle Donald Penn, made the Raiders a contender in 2016 before Carr broke his leg in a Week 16 win over Indianapolis. Oakland lost the division the following week and was eliminated in the first round of the playoffs against Houston.

Carr was given a $125 million, five-year extension the following summer but the team regressed and the inability to get a long-term deal done with Mack led to a holdout this past summer and his eventual trade.

The Raiders struggled this year in Gruden's first year back on the sideline since being fired by Tampa Bay following the 2008 season. Oakland started the season 1-8 before winning two of the past four games. The Raiders (3-10) are tied with San Francisco and Arizona for the worst record in the league.

With a likely top 10 pick of their own and two other first-rounders this year, along with two first-round picks next year, Gruden likely wanted his own people in place in the personnel departments to make those moves.