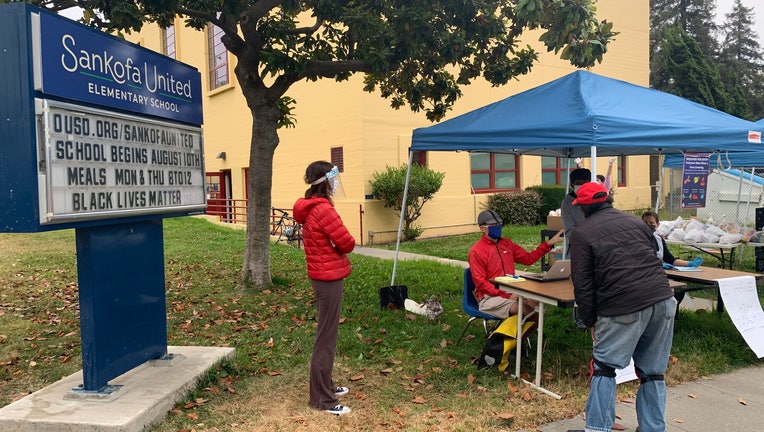 At Sankofa United Elementary School in Oakland, kindergarten started with a 30-minute chat on Zoom.

Principal Dennis Guikema dropped in on the call and said, “One showed up with a tiara, another one showed up in a superhero costume, another one was playing with her mom’s hair the whole time yet they were still very engaged.”

Guikema said despite the normal chaos of the first day of school and some technical issues, the teacher was prepared, “She’s been working really hard this last week collaborating with her grade level partner and had a really structured morning.”

Beyond quick video calls though, it’s unknown what the school year will look like. The Oakland Unified School District and Oakland Education Association ended another weekend of negotiations without an agreement on distance learning. They’ll meet again Monday after school to discuss a late-night counter proposal offered by the district Sunday.

Back to school in Oakland; there's still no deal between district and teachers over distance learning

“I want for our bargaining team to really look through the proposal right now and honor their work. Just based on the district, they know where we stand and the district, they’re aware of our intentions to improve crisis distance learning,” said Keith Brown, president of the Oakland Education Association.

Brown said the two big sticking points are forming smaller targeted student groups to give students who need extra help the attention they need and adding substitutes to co-teach and deal with technical problems so it doesn’t take time away from live lessons.

“We talked to a lot of our families we did some surveying and they said what they want for their kids is more in-person instruction," he said.

Similar to the normal school year, Sasaki said they want to give educations more flexible options.

“We have four days of full-day instruction and one day of shorter instruction where they get professional development after that day has ended with students so we’ve offered to do that as well in our latest contract proposal," he said.

Without an agreement, the union implemented its "Strong Start" plan. That means teachers will do wellness checks, community building, advise students and work with each other to plan their own learning model.

“School is beginning and we want for this to be the best experience,” said Brown.

While negotiations continue Monday, one thing both sides can agree on is they want to reach a deal as soon as possible.

The district’s superintendent will hold a news conference at 3 p.m. to talk about the first day and what to expect moving forward.