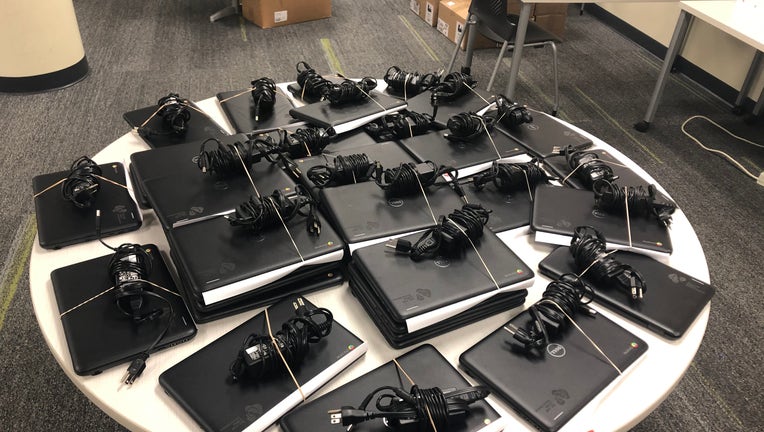 OAKLAND, Calif. - More than 340 teachers, parents, students and community members on Tuesday issued a letter to the Oakland Unified School District superintendent and mayor, demanding they "take all necessary measures" to ensure that public school students have access to the internet.

According to the letter, the teachers union is asking that the Oakland Unified School District and the city of Oakland "immediately arrange with internet providers to provide free universal internet throughout the city.”

“There is no equity in education for our most vulnerable students if all Oakland families do not have access to the internet," Keith Brown, president of the Oakland Education Association, said in a statement.

He said that in some less-affluent, flatland schools, 25% to 50% of families have little or no access to online classwork.

"Nearly a fourth of our Fremont High students do not have access to the internet. This makes distance learning a problem of equity. It is unfair for students and we need a city-wide solution quickly,"  said Patricia Segura, a teacher at Oakland’s Fremont High School.

The mayor's office did not respond for comment on Tuesday. Representatives from internet service provider companies were also not immediately available.

However, in a statement, the school district acknowledged the disparities and announced they were launching a fundraising campaign to help address the issue.

However, last week at a news conference, Gov. Gavin Newsom touted what some companies are already doing: T-Mobile is donating 13,000 tablet devices, in addition to the previously-announced 100,000 hotspot devices, for which they partnered with Google; and Verizon is providing 250,000 students with unlimited internet service at a discount.

The California Public Utilities Commission and the California Department of Education are also partnering to distribute a total of $30 million to support connectivity.

It's also unrealistic for the city or the school district to pay for the internet service. At an Oakland City Council meeting this week, projections showed the city could be down by $80 million by July. The school district has had to cut millions from the budget, even before the coronavirus pandemic.

Still, there is a great digital divide, which has been exacerbated by the forced distance learning.

This news organization reported last week that roughly 17,000 students - out of a total of 50,000 including charter school students - who don’t have computers or WiFi at OUSD, said Seth Hubbert, executive director of Tech Exchange, a nonprofit dedicated to "digital equity" that provides free and low-cost computers to schools.

Hubbert said there are another 8,000 students who might have one computer at home, but several siblings and parents who all have to share it.

As of Friday, nearly six weeks after the shelter-in-place order, district data shows that 1,450 students still don't have computers and 3,340 students don't have internet access.

Attempts by parents to purchase internet services have also failed.

According to Judy Greenspan, a teacher at United for Success and a mother of a 7th grader, said that she spent over an hour on the phone trying to set-up an account on Comcast, only to be disconnected and told that she had to go online to apply for the service. She eventually found out that the company was not scheduling any more in-home appointments.

Oakland parent Violeta Escobar told KTVU that her family does not own laptops or WiFi because, before coronavirus, she had considered them luxury items. She and her kids have cell phones, she said, mainly to communicate with each other and relatives in Mexico and El Salvador. She has been able to use her cell phone as a WiFi hotspot, but the connectivity has been spotty.

She is receiving some help from TechExchange in terms of borrowing a Chromebook for her son and nephew and niece. But she hasn't been able to secure a WiFi plan that she can afford. She lost her job working at a preschool. Her husband is still working at a warehouse.

In the hopes of trying to change the situation, the teachers union launched a social media campaign called #internet4all, trying to bring attention to the fact that during the COVID-19 pandemic, internet access is a human right and must be extended to all families.

According to Oakland educators’ demand letter, “in the absence of internet for all students, distance learning is a lie.”

IF YOU'RE INTERESTED: You can donate to Tech Exchange here.