SAN JOSE, Calif. - For the last six weeks, Franco Garcia, 14, a freshman at San Jose’s Willow Glen High School, has been doing his math, science and English assignments using only his thumbs.

That’s because his family doesn’t own a laptop or desktop computer and he does all his assignments on his phone. There are many kids like Franco. One in five, or 1.2 million California public school students, don’t have computers or internet at home, according to the State Department of Education.

“It is really difficult,” Franco said, adding that he spends about two or three hours a day on quizzes, reading and answering questions all on his cell phone. Last week, though, Franco’s family picked up a Chromebook at district headquarters, which he and his 11-year-old sister, Kiara, will share. 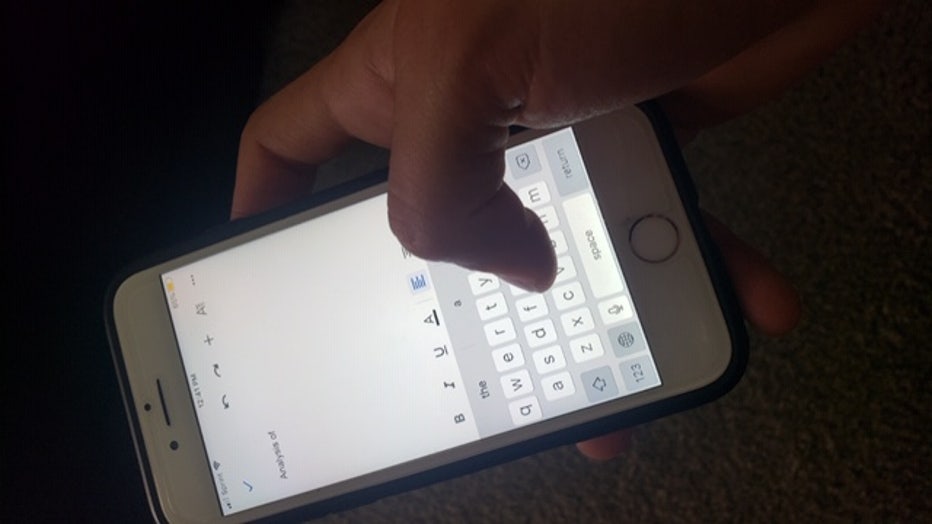 Franco Garcia, 14, of San Jose has had to do all his homework on his phone.

The digital divide has been a problem long before coronavirus swept through the globe. But this tech gap has been amplified as the deadly disease forced school districts to close campuses and students to learn online for the rest of the school year.

"We literally are having thousands of students who have not checked in," Thurmond said in a Facebook Live session last week. "California has so many resources. It is an embarrassment that we allow any of our students to go without a device or internet connectivity." 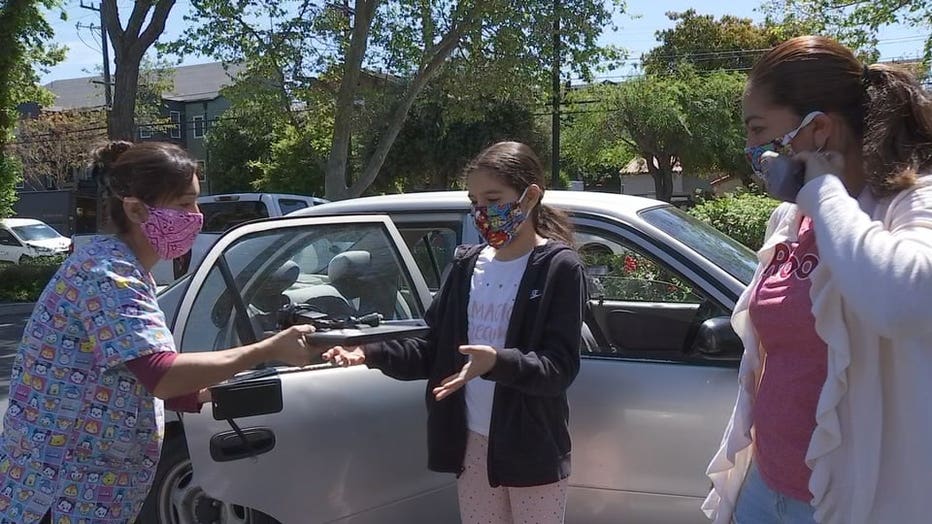 And the divide is even greater for minorities. In a parent survey in early April, the governor's office reported that 50% of low-income families and 42% of families of color reported that they lacked the laptop, Chromebook, or tablet needed to access distance learning.

High-tech companies indeed have stepped up. Apple gave out 10,000 iPads to 800 school districts and Google distributed 4,000 laptops, as two examples.

But the demand is greater than the supply.

And some school districts, like where Franco attends at San Jose Unified, haven’t received any of these donations at all. Nearly 43% of the district's students receive free or reduced-price meals, an indicator of lack of wealth.

“Everyone was interested and listened," she said. "But no one was able to provide the needed devices."

In emails to KTVU, Google said its devices were being used in rural areas, and Verizon’s and Amazon's philanthropy are geared toward students at Los Angeles Unified. Apple said it was helping out districts in Compton Fresno, Sacramento, Santa Barbara, Santa Clara and Walnut Creek.

So, the San Jose Unified District has picked up the tab itself.

So far, the district has distributed Chromebooks it already owned, and spent another $75,000 to buy 1,000 iPhone 7s with a month of unlimited data to provide WiFi hot spots. Smith doesn't have an exact count, but she said the need is greater than the number of iPhones the district could buy. 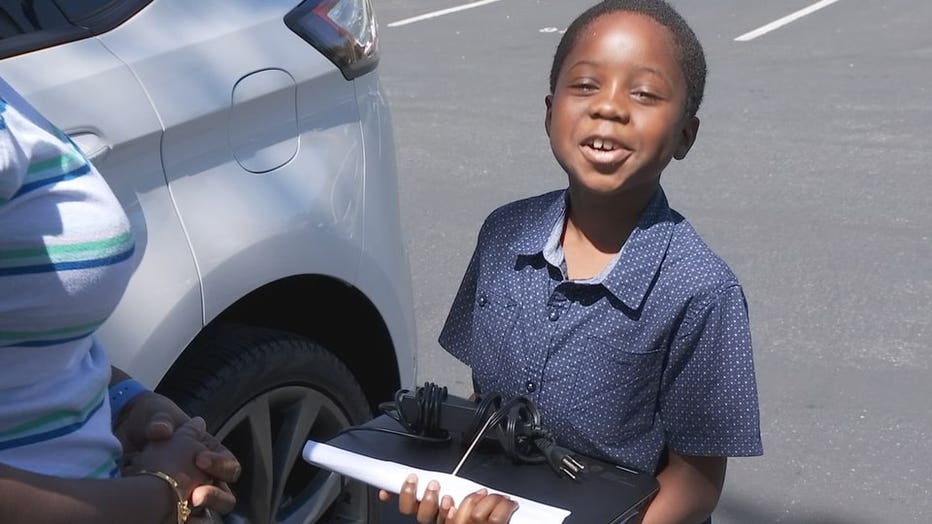 Just how many students in the Bay Area are in Franco’s situation is difficult to determine.

That’s mostly because families without computers have difficulties hearing about and turning in online surveys, which districts rely on to determine how many families need the resources.

In San Jose, for example, about one-quarter of the families turned in a computer needs survey out of 30,000 students. Smith said she simply isn’t sure how many more families need the devices.

So far, the district has handed out 2,000 laptops over the last two weeks. Staff spent countless hours rounding up the district-owned Chromebooks, disinfecting them, downloading the class-appropriate apps and handing them out to families. Smith said they plan to do a third distribution in the near future.

In San Francisco, district officials estimate that 4,000 of the 56,000, or 7 percent, of their students don’t have computer access at home. San Francisco Unified received more than $4 million in private donations, including a $2 million gift from Thoma Bravo, an equity firm helping with both meals and distance learning. And the district distributed Chromebooks to students at the end of March. 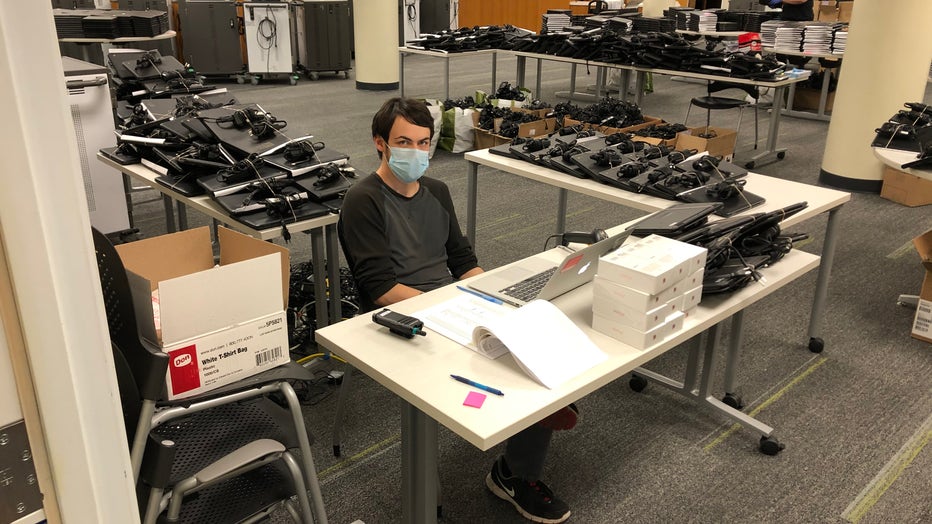 San Jose Unified staff disinfected all the laptops they handed out to students.

And in the Oakland Unified School District, there are roughly 17,000 students - out of a total of 50,000 including charter school students - who don’t have computers or WiFi, said Seth Hubbert, executive director of Tech Exchange, a nonprofit dedicated to "digital equity" that provides free and low-cost computers to schools.

Hubbert said there are another 8,000 students who might have one computer at home, but several siblings and parents who all have to share it.

Altogether, that's half of the students in Oakland public schools whose technology needs aren't currently being met at home, he said.

As of Friday, nearly six weeks after the shelter-in-place order, district data shows that 1,450 students still don't have computers and 3,340 students don't have internet access.

Some individuals, and companies including Hewlett-Packard and Salesforce, have donated monitors and money toward this effort, Hubbert said. But he said it's not enough.

That's why, Tech Exchange is actively fundraising to raise $2 million to buy about 4,000 more Chromebooks to fill this immediate gap, and trying to raise another $12.5 million more for long-term computer needs. 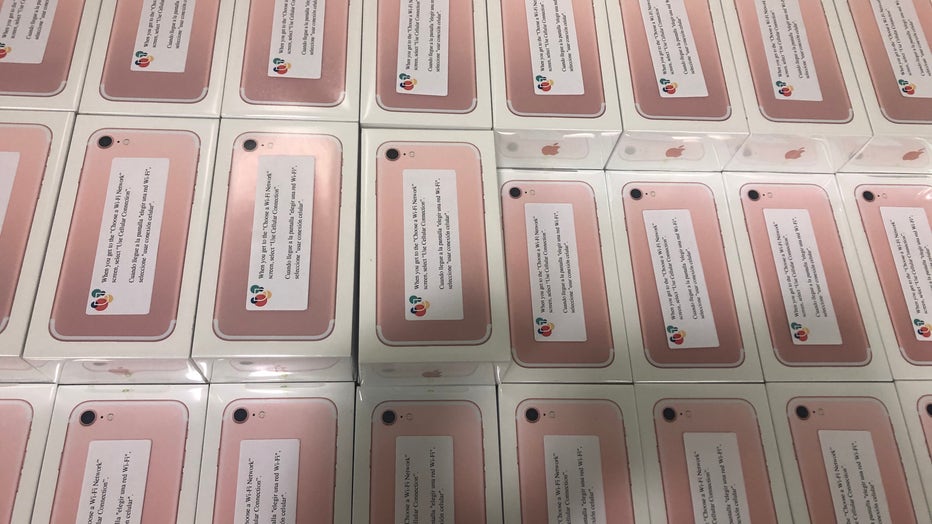 San Jose Unified bought iPhone7s at $36 apiece for students to use as WiFi hot spots.

Not having access can be logistically and emotionally daunting.

Nancy, a mother of three children in San Jose who asked that her last name not be used, said she and her husband recently lost their jobs. The family has long had to negotiate a schedule for who gets to use the one computer in the house. But now, with distance learning and their work situation, that schedule is even harder to maintain.

“My husband and I would be staying up to midnight on LinkedIn and applying for jobs because we wanted the kids to use it during the day for school,” she said.

Not only that, but the family computer is old and lacks certain features.

Nancy's daughter, a sophomore at Willow Glen, couldn’t hear her teacher on a Zoom call with the rest of the class. She had to message her teacher separately, apologizing that she was only able to call in on a phone but couldn’t hear the class over their antiquated desktop.

“It was embarrassing,” Nancy said. “I mean, we’re in Silicon Valley. She was really sad. She didn’t want others to know. Financially, we’re not in a place to provide our kids with another laptop. I felt helpless.”

Fortunately, teachers use the Zoom calls to check on students, in addition, to leading them through lessons.

The teacher picked up on Nancy's daughters' distress and reached out, seeing if the family would like to borrow a Chromebook from the school. Last week, Nancy picked up two Chromebooks to share among her kids.

She’s grateful for the help.

Having a computer at home is not just crucial for classwork, Nancy said, it's literally a lifeline to stay connected with other people. 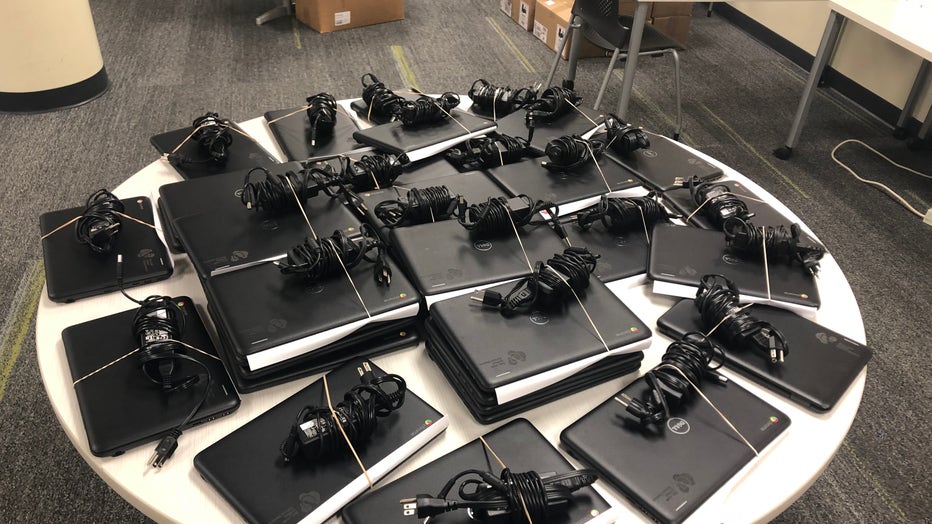 San Jose Unified has distributed about 2,000 Chromebooks so far.