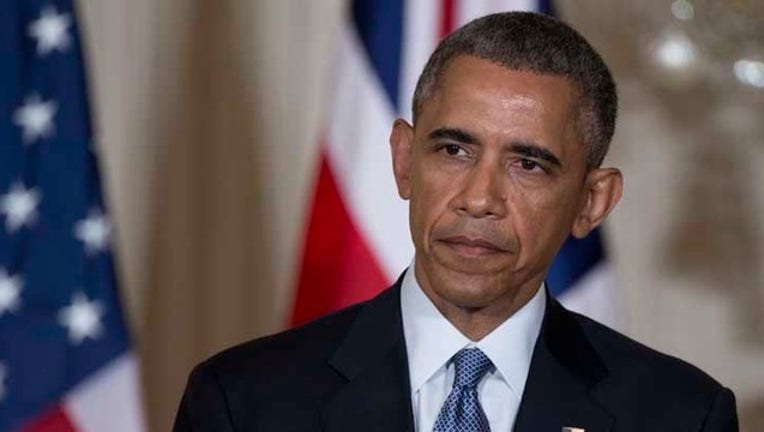 WASHINGTON (AP) — Declaring the Islamic State is on the defensive and "going to lose," President Barack Obama asked Congress on Wednesday to formally authorize military force against the militants. But he vowed not to repeat the large and costly ground wars in Iraq and Afghanistan.

Obama said a large deployment of U.S. troops won't be necessary to fight the Islamic State, and he argued that the three-page proposal he sent to lawmakers would give him and his successor the needed flexibility to wage a battle likely to take "some time."

"I'm convinced that the United States should not get dragged back into another prolonged ground war in the Middle East," the president said, flanked by his vice president and secretaries of State and Defense at the White House. "I do not believe America's interests are served by endless war or by remaining on a perpetual war footing."

The initial reaction to his congressional request was bipartisan skepticism. Republicans expressed unhappiness that Obama chose to exclude any long-term commitment of ground forces, while some Democrats voiced dismay that he had opened the door to deployment at all.

Under Obama's proposal, the use of military force would be authorized for three years, unbounded by national borders. The fight could be extended to any "closely related successor entity" to the Islamic State organization that has overrun parts of Iraq and Syria, imposed a stern form of Sharia law and killed several hostages it has taken, Americans among them.

"Make no mistake. This is a difficult mission," Obama said, adding it will take time to dislodge the terrorists, especially from urban areas. "But our coalition is on the offensive. ISIL is on the defensive, and ISIL is going to lose."

The 2002 congressional authorization that preceded the American-led invasion of Iraq would be repealed under the White House proposal, a step some Republicans were unhappy to see. But a separate authorization that was approved by Congress after the Sept. 11, 2001, terror attacks would remain in force, to the consternation of some Democrats.

At the heart of the debate, the struggle to define any role for American ground forces is likely to determine the outcome of the administration's request for legislation. White House spokesman John Earnest said the proposal was intentionally ambiguous on that point to give the president flexibility, but the approach also was an attempt to bridge a deep divide in Congress.

While asking lawmakers to bar long-term, large-scale ground combat operations like those in Afghanistan and Iraq, Obama said he wants the flexibility for ground combat operations "in other more limited circumstances." Those include rescue missions, intelligence collection and the use of special operations forces in possible military action against Islamic State leaders. "It is not the authorization of another ground war," Obama said.

"This resolution will give our armed forces the continuity we need for the next three years," he said. "It is not a timetable. It is not announcing that the mission is completed at any given period. What it is saying is that Congress should revisit the issue at the beginning of the next president's term.

Whatever the outcome, Obama's request puts Congress on the path toward a vote that could reverberate unpredictably for years.

A post-9/11 request from then-President George W. Bush for authorization to use military force against Iraq was intensely controversial, and it played a role in Obama's successful campaign for the White House in 2008.

His chief rival for the Democratic nomination, then-New York Sen. Hillary Clinton, voted in favor of the Bush proposal. Obama, who was not in Congress at the time of the vote, said later he would have opposed it, and he made it an issue in the presidential race.

Clinton, who served four years as Obama's secretary of state and is now a likely candidate for president in 2016, had no immediate reaction to the proposal.

Lawmakers were not as reticent, although outright supporters of the president's plan were relatively scarce.

House Speaker John Boehner, R-Ohio, expressed doubt it would "give our military commanders the flexibility and authorities they need to succeed and protect our people."

He said changes are likely before the measure comes to a vote, although one House committee set an initial hearing for Thursday.

Democrats had a different reason to question the president's proposal.

The House Democratic leader, Rep. Nancy Pelosi of California, issued a statement that refrained from endorsing Obama's request. It said Congress should act judiciously and promptly to pass legislation "narrowly tailored" to the fight against Islamic State fighters. She has said previously she opposes deploying U.S. "boots on the ground."

Patrick Leahy of Vermont, the Senate's longest-serving Democrat, cautioned that any legislation must be in a form that avoids "repeating the missteps of the past and that does not result in an open-ended authorization that becomes legal justification for future actions against unknown enemies, in unknown places, at unknown times."

In a letter to lawmakers accompanying the three-page draft legislation, Obama referred to four American hostages who have died in Islamic State custody — at least three of them beheaded. He said the militant group, if left unchecked, "will pose a threat beyond the Middle East, including to the United States homeland."

Among the four hostages was Kayla Mueller, a 26-year-old humanitarian worker whose death under unknown circumstances was confirmed Tuesday.

In the past, Obama has cited congressional authorizations from 2001 and 2002 to justify his decision to deploy more than 2,700 U.S. troops to train and assist Iraqi security forces and conduct airstrikes against targets in Iraq and Syria.

Obama said coalition air strikes were disrupting terrorist supply lines, destroying their tanks, their barracks, their training grounds and the oil and gas facilities that support their operations.

"We're taking out their commanders, their fighters, and their leaders," he said. "We've seen reports of sinking morale among ISIL fighters as they realize the futility of their cause."