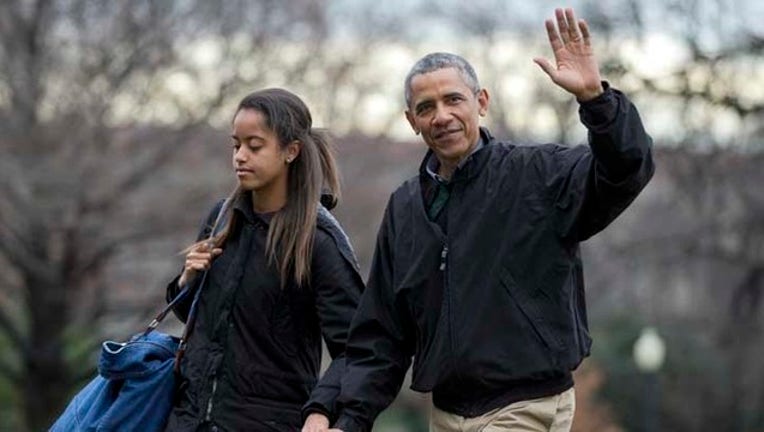 WASHINGTON (AP) — President Barack Obama is missing out on part of his oldest daughter's life: her college campus tours as she tries to figure out where to study in two years.

He was absent when 16-year-old Malia toured Stanford University and the University of California at Berkeley last summer. Her mother, Michelle Obama, accompanied the high school junior on recent visits to New York University, Barnard College and her father's alma mater, Columbia University.

One possible explanation for Obama's absence is that presidents attract attention wherever they go and their presence could detract from the visit.

Practically everywhere they go, presidents are accompanied by helpers and advisers, Secret Service agents, drivers, doctors, reporters and others who travel in his protective security bubble.

"It's hard to tour college campuses with that moving office in tow," said Lisa Caputo, former press secretary and deputy assistant to President Bill Clinton. "It brings a lot of attention, which is really not the point of the visits."

It's easier for presidential children to take these trips with their mother or other family member, she said.

"I've got to admit, like, I kind of want to go here," Obama said of Stanford. "I was trying to figure out why it is that a really nice place like this is wasted on young people who don't fully appreciate what you got. It's really nice. And everybody here is so friendly and smart, and it's beautiful. And what's there not to like?"

Obama said his administration is "infiltrated" with Stanford people, including National Security Adviser Susan Rice, Commerce Secretary Penny Pritzker and senior adviser Valerie Jarrett, and said he's always heard about everyone riding bikes around campus and hopping into the school's many fountains.

"Let's face it, I like Stanford grads," he said, adding that Stanford "is the place that made 'nerd' cool."

Bill Clinton, the most recent president to send a child straight from the White House to college, did not tour any campuses with daughter Chelsea. She did that with her mother, Hillary Rodham Clinton. Chelsea's parents accompanied her to Stanford in the fall of 1997 to begin her freshman year, and were there again to wave and blow kisses when she graduated in 2001.

Whichever college Malia decides to attend in the fall of 2016, Obama most likely will show up for her big first day as a college freshman. Malia is a junior at the exclusive Sidwell Friends School in Washington, where Chelsea also was a student.

Obama is an involved father who has been open about the pain of growing up without his dad and his desire to be a presence in his kids' lives. Despite his presidential duties, Obama still attends parent-teacher conferences and other kid functions.

Obama can use his iPad to take a virtual tour of any school she visits, an option that wasn't available in Bill Clinton's day. Malia could use her iPhone to ring her father in the Oval Office with her impressions or send a note to his BlackBerry if he's too busy to talk. They can also catch up over family dinner.

Obama quips that his children are less interested in spending time with him now that they're older, another reason for him to skip her tours.

"Most kids, I don't care who they are, really don't want their parents trailing around," said Anita McBride, who was first lady Laura Bush's White House chief of staff. McBride is also going through the college search process with her 17-year-old son. "They want this to be their experience," she said.