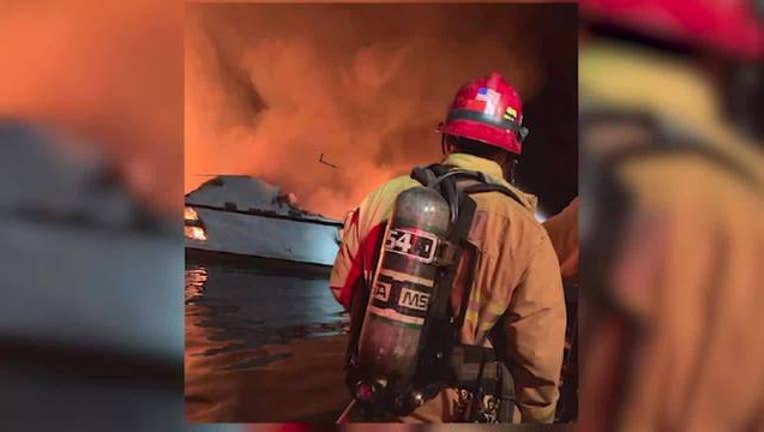 LOS ANGELES (AP) -- U.S. investigators who examined the burned-out wreckage of a scuba diving boat have not been able to determine what ignited a fire that killed 34 people off the California coast, a law enforcement official said Friday, but two inquiries are still searching for answers.

Teams from the FBI and Bureau of Alcohol, Tobacco, Firearms and Explosives have left after spending two weeks reviewing what remains of the Conception, according to an official with knowledge of the investigation.

Parts of the vessel have been sent to labs for additional testing, said the official, who was not authorized to release the information publicly and spoke on the condition of anonymity.

Investigators are still working to determine the blaze's cause and origin, though they are done looking at the boat itself, said Carlos Canino, special agent in charge of the ATF's Los Angeles office.

"We don't put a time limit on it," he said. "That all depends on the scene and the evidence."

The official said there is no indication anyone intentionally set the Sept. 2 fire. The Coast Guard, FBI and U.S. attorney's office in Los Angeles are leading a criminal probe, while spokesman Eric Weiss said the National Transportation Safety Board has an "active investigation" into the safety issues.

The captain and four crew members were asleep on the upper deck and survived the pre-dawn fire, which trapped 33 passengers and a deckhand sleeping below deck during a three-day scuba diving excursion.

Coast Guard rules require a roving night watch, and authorities were looking into possible criminal charges that would likely focus on an obscure federal law known as the seaman's manslaughter statute.

The law only requires showing negligence or that the captain or crew committed misconduct or neglected their duties.

The boat's owner, Truth Aquatics Inc., has preemptively filed a federal lawsuit under a pre-Civil War maritime law that shields boat owners from monetary damages in a disaster at sea.

Ryan Sims, a cook on the boat who broke his leg trying to escape the flames, claimed in a separate lawsuit that the boat was unseaworthy and operated in an unsafe manner.

Coast Guard records show the Conception passed its two most recent inspections with no safety violations.

Authorities will examine hundreds of documents seized from Truth Aquatics Inc. after they finished looking at the boat.

Investigators wearing protective suits walked over planks to inspect and document the burned vessel propped up by braces and scaffolding at Port Hueneme, a naval base more than 60 miles (97 kilometers) northwest of Los Angeles, the official said.

Some parts of the boat had washed away because it was submerged for two weeks off Santa Cruz Island, where the vessel was anchored the night of the tragedy.