OKLAHOMA CITY - A new law in Oklahoma seeks to crack down on protesters by increasing penalties for blocking public roadways and granting immunity to drivers who unintentionally kill or injure rioters while attempting to flee.

Gov. Kevin Stitt signed the legislation on Wednesday, one of 44 bills signed into law by the Republican governor and one of a series of GOP-backed proposals across the country aimed at cracking down on protesters.

Under the new law, unlawfully blocking a public street or highway is considered a misdemeanor punishable by up to a year in jail and a $5,000 fine. It also grants criminal and civil immunity to motorists that kill or injure someone while "fleeing from a riot."

Supporters of the bill said it was prompted mostly by an incident in Tulsa last summer in which a pickup truck drove through a crowd gathered on a Tulsa interstate while protesting the death of George Floyd in Minneapolis. Several people were injured, including one paralyzed from the waist down after falling from an overpass.

The driver, whose wife and two children were also in the car, was not charged. The Tulsa County District Attorney's Office wrote in a July memo that the family was "in a state of immediate fear for their safety" while the vehicle "was surrounded and repeatedly being struck." It added that they had been the victims of a "violent and unprovoked attack by multiple individuals who unnecessarily escalated an already dangerous circumstance by obstructing an interstate highway."

"This bill adds to language in existing law regarding riots and is directly in line with the Tulsa district attorney’s decision over the summer that protected a motorist fleeing a riot," State Rep. Kevin West, a Republican sponsor of the bill, said in a statement.

"This is an important protection for citizens who are just trying to get out of a bad situation," West continued. "When fleeing an unlawful riot, they should not face threat of prosecution for trying to protect themselves, their families or their property." 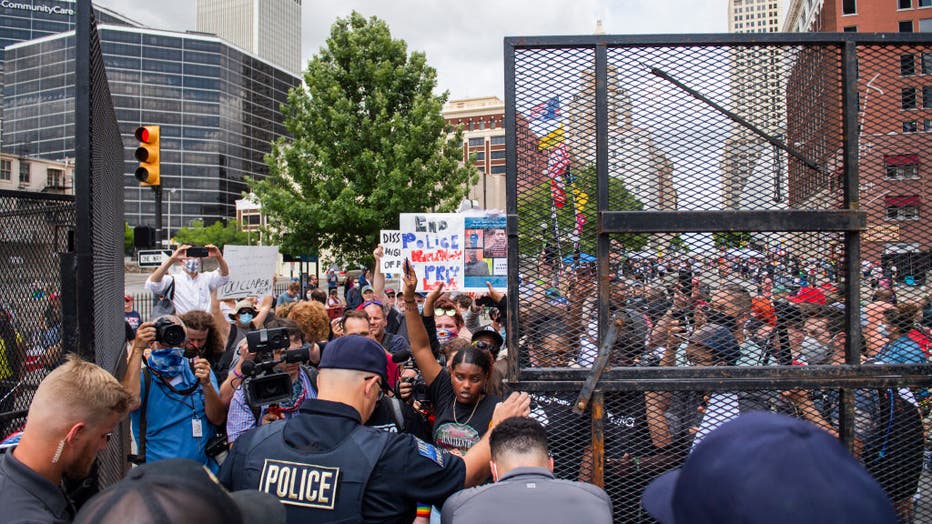 FILE IMAGE - Counter protesters attempt to enter the gate leading to a Trump rally at the BOK center on June 20, 2020, in Tulsa, Okla. (Photo by Amanda Voisard for The Washington Post via Getty Images)

State Sen. Rob Standridge, another Republican sponsor of the bill, stressed that any harm by a fleeing driver "has to be unintentional" and the vehicle occupants must feel like they are in imminent danger.

"Like people are trying to break open the windows or trying to drag somebody out of the vehicle," Standridge said. "Other than that, I don’t think this bill protects them."

House Bill 1674, which will take effect on Nov. 1, passed the state House and Senate mostly along party lines. No state House Democrats voted in favor, while the state Senate voted 38-10 with one Democrat.

Sen. Kevin Matthews, a Democrat from Tulsa and the chairman of the 1921 Tulsa Race Massacre Centennial Commission, said last week after the Senate vote that he was particularly troubled to see legislation targeting protesters but not the underlying issues of police brutality and systemic racism.

"In my community, people were bombed from the air, people had cannons shot into our churches, by some accounts 300 people dead and businesses burned down," Matthews said, referring to the 1921 attack by a white mob on the city’s Black community. "And it was said my people were rioting when it was not true."

Critics of HB 1674 have said that the legislation would disproportionately harm people of color, many of whom have led demonstrations to advocate for racial justice and police reform.

Several demonstrators marched through the Oklahoma state Capitol on Wednesday afternoon to protest what they described as anti-protest bills advancing through the GOP-controlled legislature, The Oklahoman reported.

"They are targeting groups of protesters who are just wanting to use their freedom of speech, passing bills that will intimidate them in the hopes of keeping people from using their First Amendment rights, passing bills that decriminalize the murder of protesters, which is absolutely insane," Adriana Laws, founder of the Collegiate Freedom and Justice Coalition, told the newspaper.