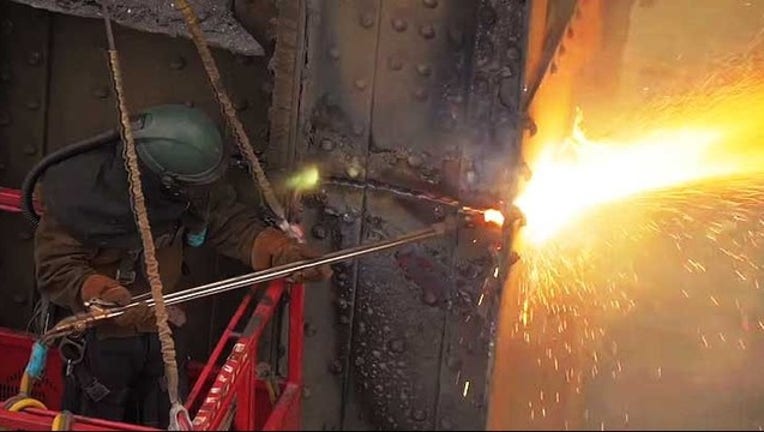 Working in near reverse order of the way it was erected some 80 years ago, the crews have dismantled the span piece-by-piece.

Early in the process, two sections of the span cantilevered outward 700 feet from their support piers and hundreds of feet above the San Francisco Bay were removed.

"This careful balancing act was performed hundreds of feet above the Bay and had to deal with the elements and heavy lifts of lead-painted steel, all while adhering to strict environmental safeguards," said Brian Maroney, the chief bridge engineer for the project in a press release.

"This steel was new 80 years ago and technology was basically paper, pencils slide rules and calculations," Maloney said. "The steel is now tired fatigued, cracked and rusted. This incredibly challenging work was completed on time, under budget and without loss of life, and that demands our respect."

The original eastern span cantilever was a half-mile span made up of steel elements pieced together in a structural system called trusses.

Prior to cutting through the cantilever and separating its two halves, preparations were made to reduce structural tension and pull the suspended span on each end toward the rest of the Bridge.