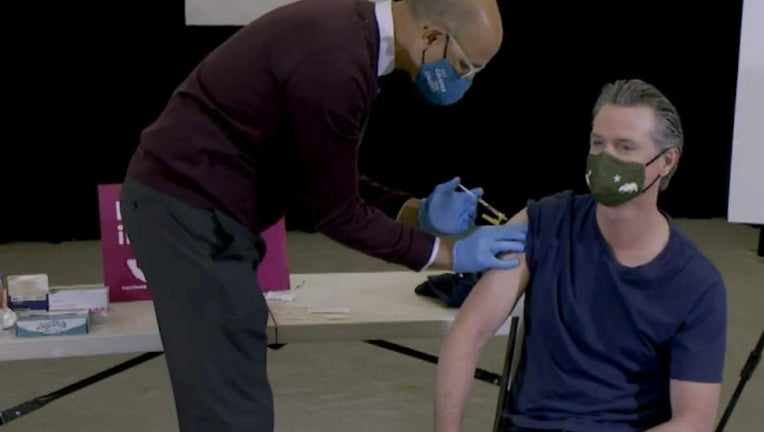 LOS ANGELES - California Governor Gavin Newsom received the Johnson & Johnson COVID-19 vaccine at the Baldwin Hills Crenshaw mall on Thursday, which was the same day all Californians over the age of 50 became eligible to get the vaccine.

"Today’s an important day obviously with the opportunity now for people my age that have been waiting 18 million shots later. [We] started this process in December and finally, we’re here for people that are in my age bracket," Newsom said on Thursday. "It’s also an opportunity to highlight the J&J vaccines that are coming in despite some of the headlines…one and done."

The California governor, 53, made the announcement on expanding vaccine eligibility last week. He also announced that beginning April 15, Californians over the age of 16 will also become eligible.

Californians aged 50 and over now eligible to receive vaccine

RELATED: Californians aged 16+ to become eligible for vaccine on April 15, residents 50+ on April 1

"It’s been such a challenging year. So much fear, so much anxiety, but now growing optimism on our fate and future," Newsom said about the changing energy in the Golden State.

Michael Lawson, President and CEO of the Los Angeles Urban League, said he’s thankful for the support the organization has received from the state in getting communities of color vaccinated.

Still, Newsom said 18 million doses is not enough. "We need to do more, we need to do better," he said.

"By the end of next month we will be able to administer 4 million doses a week, with the expectation that more supply will be available," Newsom stated last week.

Newsom said as of Thursday, nearly 31% of Californians have received at least one dose of the COVID-19 vaccine as the state anticipates more shipments of the single-dose Johnson & Johnson vaccine, in addition to more supply of the Moderna and Pfizer vaccines.

Although vaccine eligibility will expand in two weeks, Newsom admitted that due to the state’s allocation, it will take months before the majority of Californians who want the vaccine will be fully vaccinated.

"By the end of next month we will be able to administer 4 million doses a week, with the expectation that more supply will be available," Newsom stated last week.

The governor disclosed the only constraint would be manufacture supply.