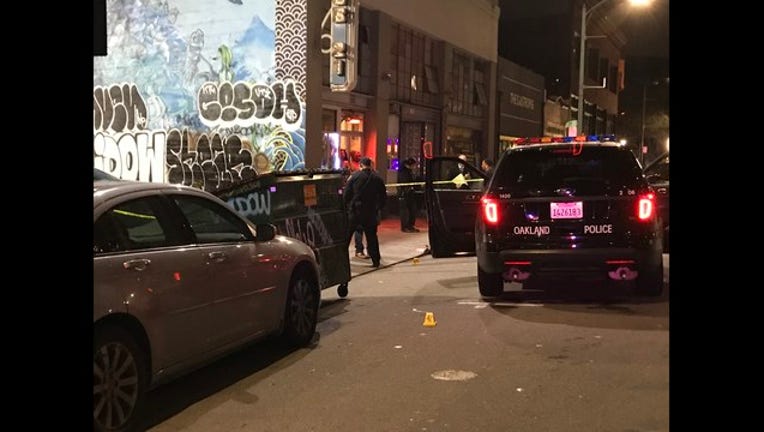 The shooting occurred around 9:40 p.m. Sunday in the 2100 block of Franklin Street. The victim wasn't identified and nobody else was injured. Dec. 23, 2018 Photo: Bay City News

OAKLAND, Calif. (KTVU) - At least one person has died following a shooting in downtown Oakland on Sunday night, according to police.

The shooting occurred around 9:40 p.m. Sunday in the 2100 block of Franklin Street, police at the scene said. The victim wasn't identified and nobody else was injured.

Several units and police officers were at the scene of the shooting. Shell casings were on the ground on Franklin Street in front of at least one nightclub and evidence markers were also seen across the street as well.

A crowd of about 10 people who may have known the victim were seen gathering outside of crime scene tape and requesting to see his body, which was still outside per witness reports.

One woman at the scene screamed in anguish and anger, throwing her cellphone across the street in frustration as police declined to let her cross crime scene tape to see the victim.

No further information is immediately available.