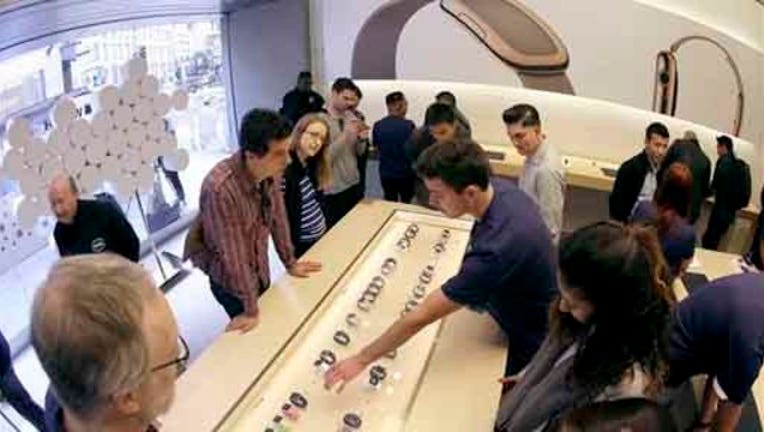 PALO ALTO, Calif. (AP) — An online rush replaced the traditional overnight queues outside Apple stores Friday as the iconic tech company began taking orders and letting shoppers get their hands on its much-vaunted smartwatch for the first time.

Eager customers placed online orders for the Apple Watch as soon as Apple's website began accepting them, shortly after midnight Pacific Time. Within half an hour, the company appeared to sell out the initial batch of watches that were available for the first official day of shipping on April 24. By midmorning, Apple's website was showing the earliest shipping date for many watch models would be in June or later.

Demand was difficult to gauge, since Apple hasn't said how many watches were available for shipping in the first wave on April 24. And in contrast with earlier releases of new Apple products, there were no big lines of shoppers waiting all night outside the company's retail stores.

That's because Apple encouraged customers to make appointments for a 15-minute opportunity to try on different models — which are priced starting at $349 and go up to $17,000 for a luxury edition — while specially trained employees explained their features. Apple is only accepting orders online, for now.

But the debut still came with some of the anticipation and marketing sizzle for which Apple Inc. is famous.

Apple retail staffers in New York, Atlanta and other cities clapped and cheered as the first customers streamed through their stores' signature glass doors just before 10 a.m. Eager shoppers also examined the watch at shops in London, Shanghai and Tokyo.

Student Victor Leung was grinning from ear to ear after finishing his watch appointment and placing his order for a lower-priced sport model at the Apple store on New York's 5th Avenue. He said he'd been waiting eagerly for the opportunity to buy one.

"It's awesome," Leung said. "You get texts on your watch, make phone calls." While he has tried other smartwatches, he thinks "Apple is different."

Despite Leung's enthusiasm, analysts said Apple may have good reasons to sell the watch through pre-orders and appointments. Online ordering should help Apple manage its inventory and manufacturing. The try-on visits should help ensure that early buyers know what to expect and how to use the watch, said Carolina Milanesi, a tech analyst at Kantar Worldpanel. She said that could build positive "word of mouth" recommendations.

And some analysts said the lag time in shipping may help build anticipation while the company works to convince other customers — those who aren't early tech adopters — why they should want this new category of gadget.

"Our view is it's going to take time for the consumer to adopt wearable technology," said Angelo Zino, analyst at S&P Capital IQ.

"We're very positive on the long-term trends for wearables and we think Apple is going to be a clear leader in the category," Zino said this week. But he added, "We think initial sales are going to be below expectations."

Apple, which is based in Cupertino, California, hasn't offered any estimates, but some analysts have predicted the company could sell 10 million to 20 million watches this year. By comparison, it sold more than 10 million of its new iPhone 6 and 6 Plus smartphones in the first weekend they were available last September, and a record total of 74.5 million iPhones in the fourth quarter last year.

Some shoppers needed no convincing on Friday. Jack Weber, a retired University of Virginia professor, said he woke up at 3 a.m. to order a $1,000 stainless steel Apple Watch online. He and his wife, Carol, were first in line for a 9 a.m. appointment to see the watches at a New York Apple store.

Carol Weber tried on a $15,000, 18-karat gold model that Jack thought would be nice to buy for their upcoming 50th anniversary. Carol also liked the steel, though, since it would go with her white gold wedding ring. She said she hasn't decided which to get yet, but is leaning toward both.