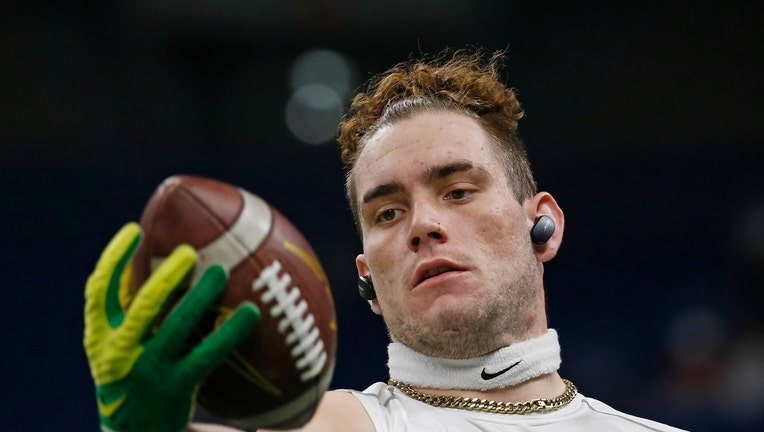 SAN ANTONIO, TX - DECEMBER 29: Spencer Webb #18 of the Oregon Ducks catches a pass before the start of their game against the Oklahoma Sooners in the Valero Alamo Bowl at the Alamodome on December 29, 2021 in San Antonio, Texas. (Photo by Ronald Cort

SACRAMENTO, Calif. - A University of Oregon football star from Sacramento died Wednesday in a diving accident at a popular recreation area in Eugene.

A coach of 22-year-old Spencer Webb told KCRA that he fell and hit his head while cliff diving near Triangle Lake.

Oregon head coach Dan Lanning wrote on Twitter, "So full of life in every moment of the day. Your smile and energy will be missed Spencer. I love you!"

The Lane County Sheriff's Office said bystanders and paramedics were not able to revive him in time for rescue teams to pull him up a steep 100-yard trail.

The sheriff's office said his death appeared to be accidental.

The standout tight end was preparing for his fifth season with the Oregon Ducks.

Webb was a star player at Christian Brothers High School in Sacramento and was considered to be one of the best in the area.

During his four seasons at Oregon, Webb recorded 31 receptions, 296 yards, and four touchdowns. His first career touchdown was arguably his most famous play, a 20-yard catch over a defender on a ball thrown by Justin Herbert in the 2019 season opener against Auburn.

Webb was also a social media star. His TikTok account, where he often posted about his life and athletic achievements, had more than 550,000 followers.

Triangle Lake and the nearby Lake Creek Falls are a popular destination for swimmers who navigate naturally formed rock slides by inner tube and swim in several swimming holes.

Webb is survived by his older brother, Cody, who became Spencer’s legal guardian 10 years ago, sister-in-law, Alicia, aunt and uncle, who all helped raise him.