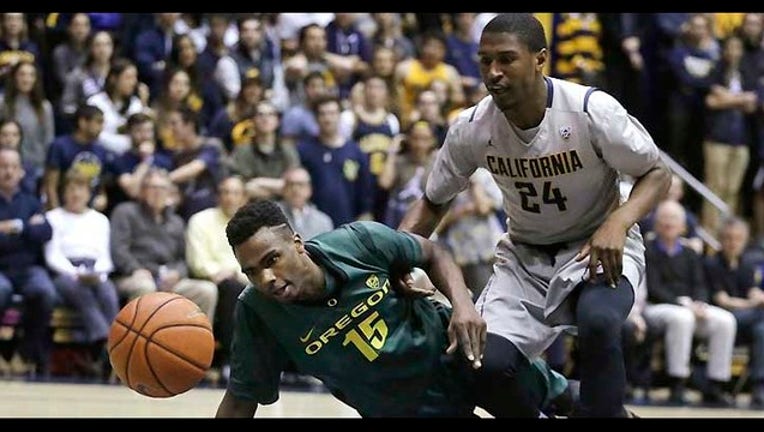 BERKELEY, Calif. — Oregon's high-scoring offense got another big night from Joseph Young and an even bigger lift from Dwayne Benjamin.

Yet it was the Ducks' stifling zone defense in the second half that helped Coach Dana Altman's team end a seven-year losing streak to California.

Young scored 25 points, Benjamin had 18 points and 10 rebounds, and Oregon pulled away in the second half to beat California 80-69 on Wednesday night.

"Defensively, the last 10 minutes our zone was really active," Altman said. "It was really effective. Our movement in it and recognizing where their shooters were was pretty good. And we outrebounded them in the second half. That was a big, big key."

Oregon made only four baskets over the final 11 minutes but countered that by going 10 of 11 from the free throw line down the stretch following a frenetic first half.

Young, the Pac-12's leading scorer, got the Ducks going early while Benjamin had 14 of his points in the second half.

"They started getting after Joe because he had a great first half," Benjamin said. "We ran a couple drag screens and I just found the open spot and they found me."

The win keeps the Oregon in third place and strengthened its bid for a first-round bye in the postseason conference tournament.

Oregon hadn't defeated California since Feb. 9, 2008 and had dropped 12 straight before handing the Bears their third consecutive loss.

"They've been hard on us," Altman said. "Before I got here, they'd beaten up on for a while. It's been a long stretch. It's finally good to get that one done."

Young scorched the Bears from the perimeter in the first half.

The Pac-12's leading scorer had 17 points before halftime, including a pair of 3-pointers that helped stake Oregon to a 39-35 lead. He missed a chance to extend the lead just before the buzzer when David Kravish blocked Young's layup attempt with two seconds remaining.

Bird, who struggled as a highly touted freshman in 2013, nearly matched Young and kept the Bears close with 16 points in the first half.

California opened the second half on an 11-5 run, capped by consecutive 3s from Bird and Sam Singer, and led 48-44.

Benjamin's follow-up of his own miss put the Ducks back in front and his short hook shot extended Oregon's lead to 54-51.

Cook made five straight free throws to make it 65-58. He later scored on a soaring left-handed dunk to help seal the win.

"We just did poor job of holding those long box-outs and they tipped the ball out," Cal coach Cuonzo Martin said.