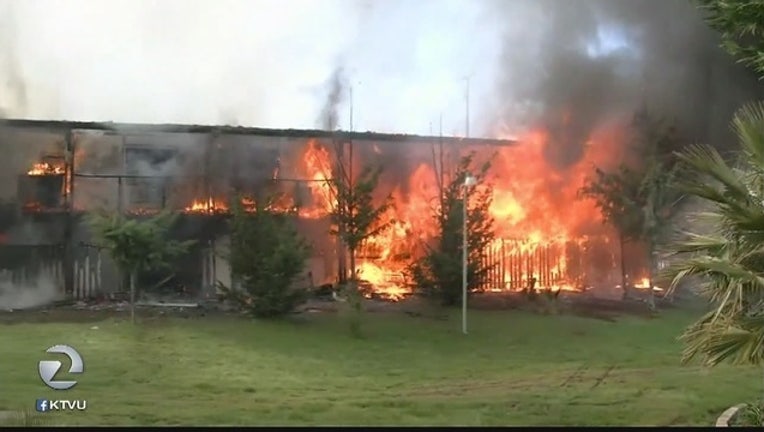 VALLEJO, Calif. (BCN) - VALLEJO (BCN) A fire that destroyed 16 units at the Travel Inn in Vallejo Sunday morning started in a downstairs unit, but the cause is still under investigation, a Vallejo Fire Department engineer said.

The fire spread from unit 131 to the unit above where several gallons of gasoline were stored on the balcony, Engineer Kevin Brown said.

"That helped to rapidly spread the fire," Brown said.

Vallejo firefighters who participated in a training drill at the Travel Inn at 160 Lincoln Road East three weeks before responded to Sunday's fire, Brown said.

Firefighters found code violations at the Travel Inn, including non-functioning smoke detectors in 15 units in two wings that did not burn Sunday, Brown said.

Other minor violations included two areas where numbers on apartment doors or on buildings were painted over or not visible, Brown said.

The Vallejo Fire Department audited the Travel Inn three years ago. Minor violations that could be fixed in one day were found and the hotel passed inspection, Brown said.

The Travel Inn has had different on-site managers in the past three years, Brown said. The Travel Inn is considered a residential motel where tenants can stay as long as a year in addition to accommodating overnight guests, Brown said.

Firefighters from Crockett and Benicia also responded to the three-alarm fire, and Fairfield and American Canyon firefighters staffed Vallejo's stations during the blaze, Brown said.

No one was injured or killed in the fire, but a cat perished, Brown said.

A gofundme has been set up for the victims of the fire.