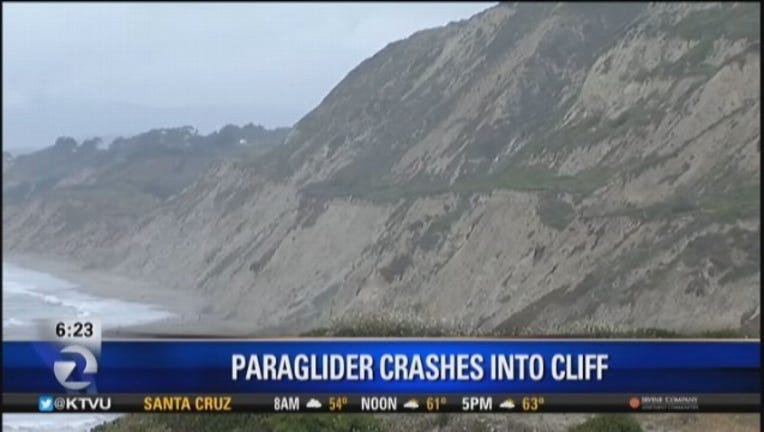 DALY CITY, Calif. (KTVU) -- San Mateo County investigators are looking into a deadly accident that killed a paraglider in Daly City Sunday morning. It happened at 9:30 a.m. Rescuers used ropes to reach the unidentified paraglider, who crashed into the cliff at Mussel Rock Beach. He was pronounced dead at the scene. It's unclear if experience level, weather, or other factors played a role in the deadly crash.

"I don't think people would do it without knowing it comes with some risk," said paragliding instructor Heidi Lee. "It's safe, but obviously the sport is as safe as you make it."

Lee runs Blackhawk Paramotoring, a motorized version of the sport. Most of the paragliders at Mussel Rock Beach on Sunday were free flight pilots. "In free flight you rely on that ridge lift," Lee said, referring to the wind that lifts the chute. "You could go up over the back (of the ridge), so you have to be very careful. If it's too light, you're not going to get enough lift."

The crash isn't the first for a paragliders at Mussel Rock. In June 2013, a 79-year old man hit the cliffs and went to the hospital with serious injuries. "It's a pretty rare occurrence," explained paraglider Daniel Barcay. "With any aviation you're taking risk, and you have to think very carefully about minimizing the risk."

Barcay said once you do, the risk is worth the reward. "People think about it like it's a high adrenaline sport and it's not," he said. "If anything, it's sort of meditative." Lee agreed. "So many people dream about flying as a kid and this is one way for you do it that's very inexpensive," she said smiling. "It's freeing."