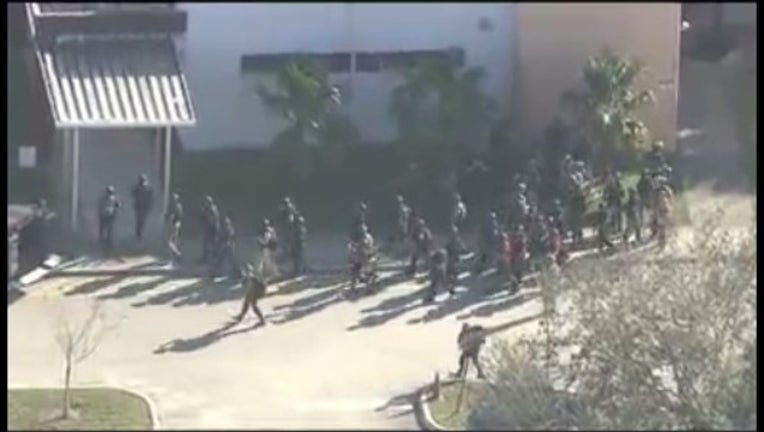 BUFFALO, N.Y. (AP) - Long before an ex-student opened fire on his former classmates in Parkland, Florida, many school districts conducted regular shooting drills - exercises that sometimes included simulated gunfire and blood and often happened with no warning that the attack wasn't real.

The drills began taking shape after the Columbine High School shooting in 1999. But 20 years later, parents are increasingly questioning elements of the practice, including whether the drills traumatize kids.

April Sullivan was pleasantly surprised by an "I love you, Mom" text from her daughter last May, even though she knew the eighth-grader wasn't supposed to be using her cellphone during school in Short Pump, Virginia. But she did not know that her child sent it while supposedly hiding from an intruder. The girl didn't know the "code blue" alert was a drill.

"To find out later she sent that text because she was in fear for her life did not sit well with me," Sullivan said.

Henrico County Public Schools have since changed the way they conduct drills, making clear at the start that the events are not real and notifying parents as the drill begins or right after, district spokesman Andy Jenks said.

The backlash underlines the challenges administrators face in deciding how far to go in the name of preparedness.

Thirty-nine states require lockdown, active-shooter or similar safety drills. Other states have less explicit requirements or leave it to districts, according to the Education Commission of the States. A Mississippi task force has proposed twice-yearly active-shooter drills.

But even as the drills become routine for many of the nation's 51 million elementary and secondary public school students, there is no consensus on how they should be conducted, experts said.

No data exists, for example, to show whether a drill with simulated gunfire is more effective or whether an exercise that's been announced in advance is taken less seriously than a surprise.

"Some hard data on each question are needed with urgency," said University at Buffalo professor Jeremy Finn, who gathered experts from around the country to evaluate school security measures at a conference in Washington, D.C., in October.

After Columbine, lockdowns that involved bolting the door and crouching quietly out of sight became the norm. In 2013, the Department of Education recommended giving staff latitude to evacuate, barricade classroom doors or, as a last resort, fight back by throwing things or rushing the attacker.

"Do you really want it to be your kid who's the one who takes the bullet and winds up with a plaque in the lobby of the school saying he went down as a hero?" asked Bethel Park, Pennsylvania, parent Nanette Adams, who disagreed with the decision to adopt a widely used safety protocol during a September drill at her 15-year-old son's high school.

The protocol is known as ALICE, which stands for alert, lockdown, inform, counter and evacuate.

"To me, this just seems like an indirect admission on the part of the schools that they really have no control over who gets into the building, and the school security officer isn't enough to keep the place safe so we need to hold the kids accountable for doing it," she said.

After public criticism of the unannounced Short Pump drill and others, the Virginia House of Delegates last month considered, but defeated, legislation requiring schools to give parents advance notification.

"I think that's baloney. They're very aware of what can happen in this day and age. They all see the news. They all see social media," said Sullivan, whose daughter declined to be interviewed by The Associated Press but described the drill for Richmond television station WWBT a few days later.

"I thought I was probably going to die that day," she said. "We hear the door handle jiggling up and down and then we see the door open, and it's our resource officer telling us it's a drill."

When her son's school fired blanks during a drill, Adams questioned whether it was really necessary to expose children to the sound of gunfire. Others complained that such realistic exercises can take a toll on classroom learning even after the drills are done.

Mo Canady, executive director of the school resource officers' group, recommends districts save the most intense exercises for staff only. As the decision-makers, he said, "they need to know a little more what that's going to feel like."

For students, lower-stress drills that have them listening to instructions and running through the motions, like traditional fire drills, should be the focus, he said.

"We need to be as prepared as we can," Canady said, "but it doesn't mean that we've got to terrify students to get them prepared."