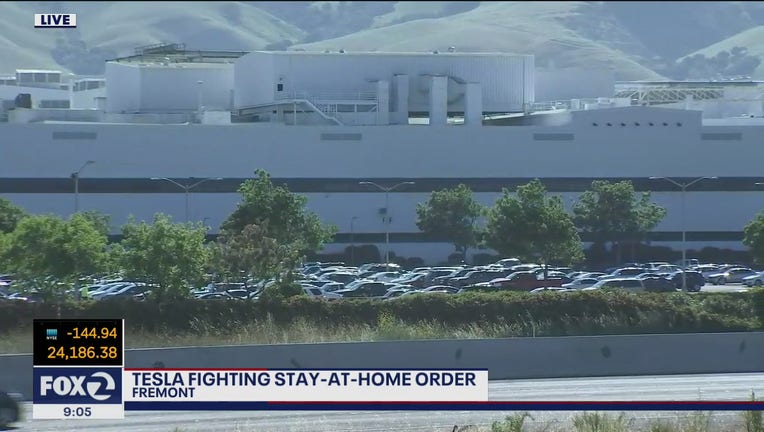 FREMONT, Calif. - Even before the sun came up Monday, it appeared as though the parking lot was full at the Tesla factory in Fremont.

That's news because over the weekend, CEO Elon Musk sued Alameda County over the shelter-in-place order.

Tesla says there is a plan to get employees back to work safely, but Musk has expressed frustration that the county won’t let it happen.

Tesla is allowed to maintain minimum services at the factory, like payroll and product inventory, so it was not immediately clear who was at work on Monday, or if manufacturing started up again.

KTVU received a call from a Tesla employee who said he was at work from 6 p.m. Sunday until 6 a.m. Monday. He said Tesla is "up and running" and he feels like health guidelines aren’t being followed.

Tesla did not immediately respond if they're starting production again.

At a news conference on Monday, Gov. Gavin Newsom said he thought Tesla could resume operations next week.

Vehicle production stopped in Fremont on March 23 and has been on hold ever since because of Alameda County’s shelter-in-place order.

Because of that, Tesla filed a lawsuit in federal court against the county for allegedly overstepping federal and state coronavirus restrictions.

In a statement, Alameda County health officials say they’ve been working closely with Tesla and are creating a safety plan that allows people to back to work while protecting their health. They hope to come to an agreement soon.

Musk was outspoken this weekend on Twitter about his issues with not being allowed to reopen. He threatened to move the company’s Palo Alto headquarters and Fremont plant out of state.

Michael Coates, an auto expert, explained how the timing of the shelter in place is hurting the company.

Mei says Tesla is critical to the city’s employment base. If essential businesses can operate with safety guidelines, so can others, Mei said.

Palo Alto Mayor Adrian Fine says he values having companies like Tesla in the city and would be disappointed if the carmaker left.