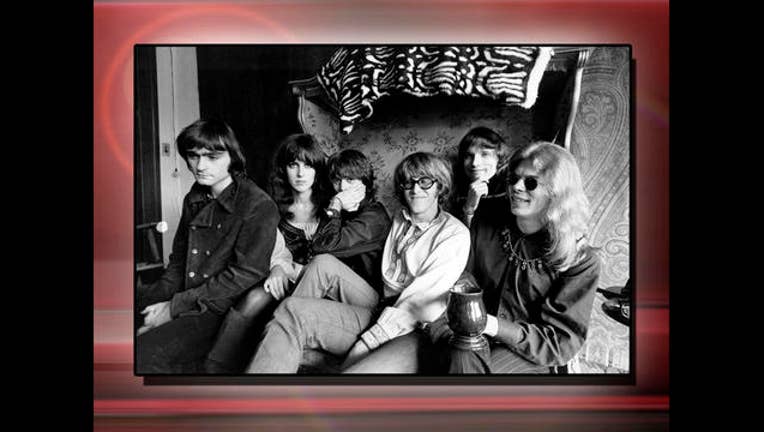 SAN FRANCISCO (AP) — NEW YORK (AP) -- Paul Kantner, a founding member of the Jefferson Airplane who stayed with the seminal San Francisco band through its transformation from 1960s hippies to 1970s hit makers as the eventual leader of successor group Jefferson Starship, has died at age 74.

Kantner, who drew upon his passion for politics and science fiction to help write such rock classics as "Wooden Ships" and "Volunteers," died on Thursday of organ failure and septic shock. He had been admitted to a San Francisco hospital after falling ill earlier in the week, his former girlfriend and publicist Cynthia Bowman, the mother of one of his three children, told The Associated Press.

The guitarist and songwriter had survived close brushes with death as a younger man, including a motorcycle accident during the early 1960s and a 1980 cerebral hemorrhage, and he recovered from a heart attack last year.

Few bands were so identified with San Francisco or so well-embodied the idealism and hedonism of the late `60s as Jefferson Airplane, its message boldly stated on buttons and bumper stickers that read "THE JEFFERSON AIRPLANE LOVES YOU."

The Airplane advocated sex, psychedelic drugs, rebellion and a communal lifestyle, operating out of an eccentric, Colonial Revival house near Haight-Ashbury. Its members supported various political and social causes, tossed out LSD at concerts and played at both the Monterey and Woodstock festivals.

Formed by veterans of the folk circuit in the mid-'60s, the Airplane combined folk, rock, blues and jazz and was the first group from a Bay Area scene that also featured Janis Joplin and the Grateful Dead to achieve mainstream success, thanks to the classics "Somebody to Love" and "White Rabbit."

Besides Kantner, who played rhythm guitar and added backing vocals, the Airplane's best-known lineup included singers Grace Slick and Marty Balin; lead guitarist Jorma Kaukonen; bassist Jack Casady; and drummer Spencer Dryden, who died in 2005. Jefferson Airplane, named in part after blues artist Blind Lemon Jefferson, was inducted into the Rock and Roll Hall of Fame in 1996 and is scheduled to receive the Recording Academy's lifetime achievement award this year.

"He was the first guy I picked for the band and he was the first guy who taught me how to roll a joint," Balin wrote of Kantner on his Facebook page. "And although I know he liked to play the devil's advocate, I am sure he has earned his wings now"

Kantner, who looked as much like a college student as a rock star with his glasses and shaggy blonde hair, did not have the vocal or stage presence of Balin and Slick, or the instrumental power of Kaukonen or Casady. But he became the conscience of the band and by the end of the `60s was shaping its increasingly radical direction, whether co-writing the militant "Volunteers" with Balin or inserting a profane taunt into his own incendiary "We Can Be Together," leading to an extended fight with their record company, RCA.

Meanwhile, Kantner and Slick reigned as one of rock's most prominent couples. Rolling Stone would note their contrasting styles, labeling Slick "the Acid Queen of outrageousness" and Kantner her "calm, dry, sardonic flip side." In 1971, Slick gave birth to their daughter, whom the couple originally wanted to call God, but decided to name China. (China Kantner became an actress and MTV VJ.)

Slick and Kantner broke up in the late 1970s and Kantner had a son, Alexander, with Bowman, and another son, Gareth.

Kantner was the Airplane's only native San Franciscan and its most political and experimental thinker. He had been a science fiction reader since childhood and with friends David Crosby and Jerry Garcia among others recorded a 1970 concept album about space travel, "Blows Against the Empire," credited to Kantner and "Jefferson Starship."

Kantner, Crosby and Stephen Stills would collaborate on the escapist, post-apocalypse fantasy "Wooden Ships," which Jefferson Airplane and Crosby, Stills and Nash each recorded and performed at Woodstock.

With perfect timing for a `60s band, the Airplane began splitting apart at the end of decade. Kaukonen and Casady founded the blues group Hot Tuna, and Balin, the band's estranged original leader, also left. In 1974, Kantner and Slick brought in new musicians and renamed the group Jefferson Starship. Their sound softened and, with Balin back, they had hit singles with "Miracles" and "Count On Me" among others and a No. 1 album, "Red Octopus."

But by the mid-1980s, when Slick and Mickey Thomas were lead vocalists, Kantner thought the music so "mundane" that he left the Jefferson Starship and successfully forced the remaining members not to use the name "Jefferson." (His former bandmates called themselves "Starship" and had three No. 1 songs, including "Sara" and "We Built This City").

Over the past 30 years, Kantner, Balin and Casady occasionally performed as the KBC Band and a reunited Airplane briefly toured and recorded. Kantner made a handful of solo and Jefferson Starships albums and used various musicians in the studio and on the road, including daughter China on vocals and son Alexander on bass.

Kantner was born in 1941, the musical and nonconforming son of a traveling salesman. He dropped out of college to pursue a career in folk music and became friendly with Crosby and future Starship member David Freiberg, spending days and nights on the beach, strumming guitars and indulging in Crosby's premium stash of marijuana.

Soon after the release of the Airplane's first album, "The Jefferson Airplane Takes Off," the group underwent a fateful change: Vocalist Signe Toly Anderson left to have a baby in the fall of 1966 and was replaced by Slick, who had been a member of the Bay Area group The Great Society. Slick brought a fiery, charismatic style and, just as important, "Somebody to Love" and "White Rabbit," anthems for 1967's "Summer of Love" and highlights of the Airplane's landmark psychedelic album "Surrealistic Pillow."

Kantner, who spent much of his life in his native city, would look back years later and remember a golden age of art, free love and joyous possibility. He joked that San Francisco was a privileged haven, "49 square miles surrounded by reality." (The correct number is closer to 47). He believed deeply in the `60s dream, often citing an anecdote that for a few days in 1966 the stars were so aligned that you could expect any wish to be granted.

"Which, needless to say, it was," he liked to add.