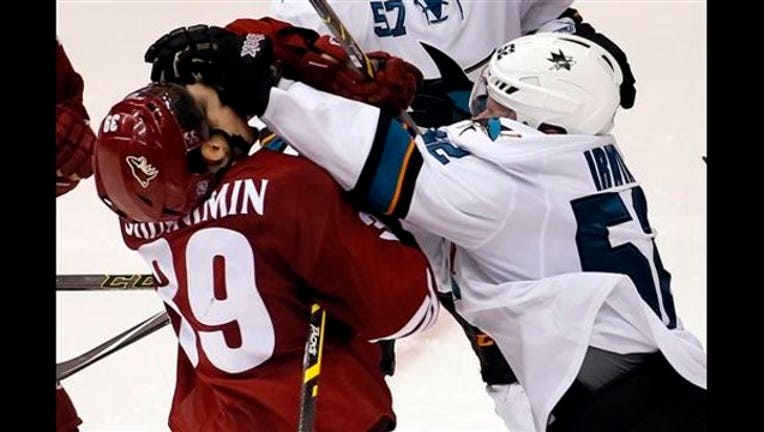 GLENDALE, Ariz. (AP) — Overeager for a win, the San Jose Sharks repeatedly overskated the puck, leading to a two-goal hole.

One lucky bounce changed their fortunes.

Joe Pavelski scored on a shot that went off a skate early in the second period and added an empty-net goal to finish off his fourth career hat trick, helping the Sharks end a three-game losing streak with a 4-2 in over the Arizona Coyotes on Friday night.

"We were overanxious maybe, trying to do much, overcommit in some areas, and after that it just went the other way in a hurry," said Pavelski, who reached the 30-goal mark for the third time in his career. "To come out with the goal early in the second period really set the momentum."

The Sharks had struggled since February started and were quickly in a hole against Arizona, giving up a goal in the game's opening two minutes and another to trail 2-0 after one period.

Pavelski gave them a spark 27 seconds in the second, when a pass through the crease went off the skate of Arizona defenseman Oliver Ekman-Larsson into the goal. He added another goal in the period and San Jose tightened up defensively the rest of the way behind Antti Niemi, who stopped 32 shots after allowing 12 goals the previous three games.

"It was a good comeback win, but unfortunately we put ourselves in that situation," McLellan said. "Not the way we wanted to start, but I thought some of the leaders stepped up and started to straighten some things out."

The Coyotes, who have been playing better over the past two weeks, got off to a great start.

Mark Arcobello, picked up on waivers from Pittsburgh, had a goal in his Arizona debut to become the second player in NHL history with a point with four teams in the same season, joining Dennis O'Brien in 1977-78. Martin Erat also scored in the second period.

The Coyotes played a solid game after that, but had a couple of bad bounces go against them to lose for the third time in four games.

"I thought we battled hard, we just couldn't come up with that extra goal we needed," Coyotes coach Dave Tippett said.

The Sharks are still in solid playoff position in the Western Conference, but were looking to get back on track after struggling since February started.

The main culprit has been defense; San Jose allowed 23 goals while going 1-3-2 over its previous six games.

The trend continued early against the Coyotes.

Arcobello had a spectacular start in his Arizona debut, scooping up a turnover by Mirco Mueller in the neutral zone, then skating in on a 2-on-1 before beating Niemi to the stick side 1:42 in.

Erat made 2-0 later in the period, one-timing a pass from Sam Gagner, who lifted the puck just over a defenseman's stick to set up the shot.

The Sharks tightened up defensively after that, ending their streak of allowing a goal in 11 straight periods.

Pavelski tied it late in the period on a power play, lifting a shot from the right circle over Smith's glove and shoulder.

Goodrow put San Jose ahead early in the third period, beating Smith on the short side after Coyotes defenseman Andrew Campbell got caught pinching in on offense and couldn't come up with the bouncing puck along the boards.

"The puck was bouncing all over the place, I went down to one knee to try to keep it in and it took a bounce, went through my arm," Campbell said. "And they were off."