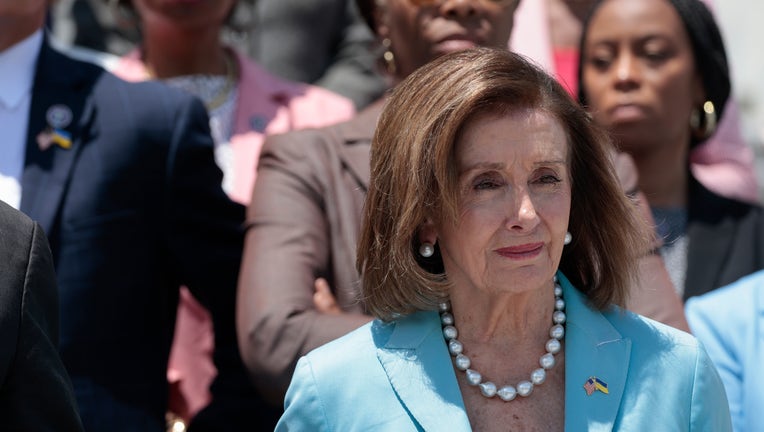 WASHINGTON, DC - MAY 19: House Speaker Nancy Pelosi (D-CA) delivers remarks at a Congressional Tri-Caucus event on the mass shooting at the Tops Grocery Store in Buffalo, NY, from the House East Front Steps at the U.S. Capitol on May 19, 2022 in Wash

OAKLAND, Calif. - Speaker of the House Nancy Pelosi on Tuesday issued a statement on the mass shooting at a Texas elementary school where the gunman killed 14 children and a teacher. Gov. Greg Abbott said the 18-year-old gunman was dead. She condemned the shooting as a "cold-blooded massacre," adding that the act was "monstrous."

She also calls on Congress to enact life-saving legislation on gun control, saying that all-too-often after mass shootings that there have been congress members who have offered "hollow words."

"Words are inadequate to describe the agony and outrage at the cold-blooded massacre of little schoolchildren and a teacher at Robb Elementary School today.  This monstrous shooting stole the futures of precious children, who will never experience the joys of graduating from school, chasing the career of their dreams, falling in love, even starting a family of their own."The hearts of all Americans are broken as we pray for the families left forever shattered and a community left forever scarred by the unspeakable grief of losing a loved one. We also extend our sympathies to all those who have lost a loved one to gun violence over time, as this horrible crime deepens their suffering."We are united in our deep gratitude for the heroes who put their lives on the line to respond to this deadly mass shooting." Across the nation, Americans are filled with righteous fury in the wake of multiple incomprehensible mass shootings in the span of just days.  This a crisis of existential proportions – for our children and for every American. For too long, some in Congress have offered hollow words after these shootings while opposing all efforts to save lives. It is time for all in Congress to heed the will of the American people and join in enacting the House-passed bipartisan, commonsense, life-saving legislation into law."

Tuesday's shooting was the deadliest shooting at a U.S. grade school since the shocking attack at Sandy Hook Elementary in Newtown, Connecticut, almost a decade ago. And it came just 10 days after a gunman in body armor killed 10 Black shoppers and workers at a supermarket in Buffalo, New York, in what authorities say was a racist attack.

The gunman entered Robb Elementary School in Uvalde with a handgun and possibly a rifle, Abbott said. Officials did not immediately reveal a motive, but the governor identified the assailant as Salvador Ramos and said he was a resident of the heavily Latino community about 85 miles (135 kilometers) west of San Antonio.