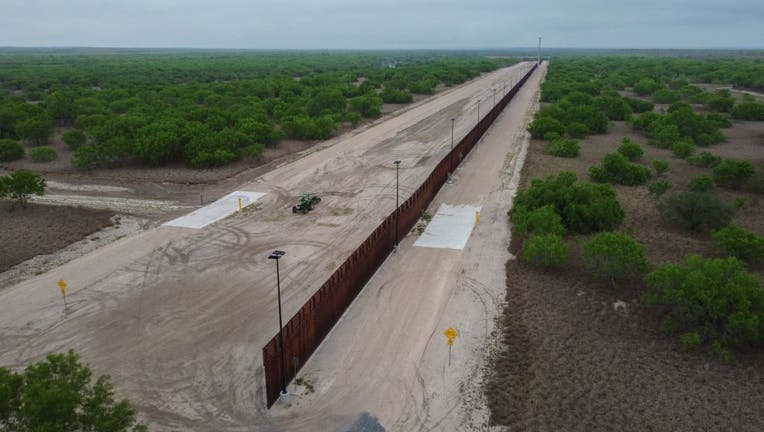 A photo taken on March 30, 2021 shows a general view of an unfinished section of a border wall that former US president Donald Trump tried to build near the southern Texas border city of Roma. - The 11,000 inhabitants of the Texas border town Roma ha

The Department of Defense announced Friday it was canceling border wall construction contracts that had been paid for with funds originally intended for military use.

The funds were reallocated under former President Donald Trump after the Supreme Court cleared the way for the administration to use billions of dollars in Pentagon funds to build sections of a border wall with Mexico.

"Consistent with the President’s proclamation, the Department of Defense is proceeding with canceling all border barrier construction projects paid for with funds originally intended for other military missions and functions," Jamal Brown, a Pentagon spokesperson, told FOX Television Stations.

He said the funds were originally intended to go towards schools for military children, overseas military construction projects in partner nations and the National Guard and Reserve equipment account.

"DoD has begun taking all necessary actions to cancel border barrier projects and to coordinate with interagency partners.  Today’s action reflects this Administration’s continued commitment to defending our nation and supporting our service members and their families," Brown’s statement continued.

President Joe Biden ordered a pause on all wall construction on his first day in office, leaving billions of dollars of work unfinished — but still under contract — after Trump worked feverishly last year to build more than 450 miles, a goal he said he achieved eight days before leaving office.

Biden, seeking to fulfill a pledge not to build "another foot" of a border wall, gave aides until late March to determine how much it would cost to cancel the contracts and whether the money could be spent elsewhere.

The department is reviewing which of the billions of dollars in delayed projects would get priority.

As of Jan. 15, the government had spent $6.1 billion of the $10.8 billion in work it signed contracts to have done, according to a Senate Democratic aide with knowledge of the contracts who spoke on condition of anonymity to the Associated Press because details have not been made public. The full amount under contract would have extended Trump’s wall to 664 miles.

Publicly, the Trump administration said it secured $15 billion for the wall. The Senate aide said it was actually $16.45 billion, $5.8 billion of which was appropriated by Congress and the rest diverted from the Defense and Treasury departments.

RELATED: Biden's first 100 days: A look at what the president has done since taking office

The Department of Homeland Security also announced Friday that it’s addressing environmental issues along the border caused by construction of the wall.

Hidalgo County, Texas, officials have expressed alarm about flooding risks during the hurricane season starting in June from breaches in a levee system.

The department said it would also fix "improper compaction of soil and construction materials" along parts of a 14-mile barrier in San Diego and soon unveil plans to address additional damage from border wall construction during Trump’s presidency. The San Diego wall is largely in unpopulated stretches in areas restricted to Border Patrol agents.