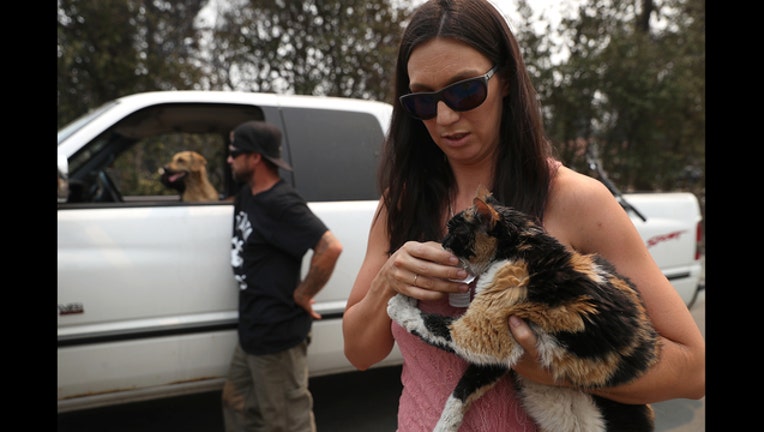 File photo -- A cat was found in a bush near a home that was destroyed by the Carr Fire on July 27. Volunteers with Carr Fire Pet Rescue and Reunification say they've reunited at least 80 families with pets (Photo by Justin Sullivan/Getty Images)

Embers falling on their heads, Venesa Rhodes and her husband had seconds to rush their two beloved cats into their SUV before a wildfire last summer would overtake them all.

One cat got in. But the other, named Bella, bolted and disappeared as the blaze bore down. The couple had no choice but to flee, and their home and much of the neighborhood in Redding, California, soon was reduced to ash.

Rhodes and her husband, Stephen Cobb, presumed Bella was dead. Devastated by their losses, they moved 1,800 miles (2,900 kilometers) to Rhodes’ hometown of Anchorage, Alaska, to start over.

Nearly six weeks later, they got a call that left them gobsmacked: Bella was alive. Volunteers had put out a feeding station at Rhodes’ burned-out property, staked it out after spotting the cat, and then trapped her.

“I started bawling,” Rhodes said from Anchorage, where Bella was curled up in a corner sleeping. “We were shocked. We were just so overjoyed and just hoping she was OK.”

Rhodes and Cobb are among dozens of people who lost their homes in the deadly Carr Fire but had their lives brightened weeks or months later when their pets were found.

A network of about 35 volunteers — called Carr Fire Pet Rescue and Reunification — is responsible for many of the happy endings, which continue more than two months after firefighters extinguished the blaze, which destroyed more than 1,000 homes and killed six people.

The group formed with the help of another volunteer animal group born out of the devastating Tubbs Fire, which killed at least 22 people and destroyed thousands of homes last year in wine country north of San Francisco.

Robin Bray, a field coordinator for the Carr Fire group, said about 80 pets have been reunited with their families using social media and specially made kiosks in Redding where images of found pets are posted. Most are cats that have “been through hell,” she said.

Bray said each new reunion fuels her and the other volunteers, many of whom use their own money to trap and treat the animals.

“We’ve seen amazing things,” Bray said. “We’re finding cats that were in a house and the owners presumed they had passed. The heat of fire breaks windows in houses and cats jump out and run and hide. They’re survivalists.”

The volunteers go to elaborate lengths to catch the animals, which often are traumatized and injured. Equipped with night-vision cameras, traps and lots of food for bait, the volunteers stake out an area where a missing pet has been spotted, waiting for the right moment to drop a trap.

They won a hard-fought rescue of a dog nicknamed Buddy on Oct. 27 after he had eluded capture for weeks. They tried luring him with steak and french fries, another dog and a pickup truck like the one his owner drove before finally nabbing him.

It was a two-woman, two-hour operation. One woman crawled on the ground and placed food under a trap and the other waited in a truck and pulled a rope to complete the capture.

Bray, a private pilot by day, once spent nearly seven hours trapping a cat. The wait was worth it, she said.

“So many of these people have lost everything,” Bray said. “The only thing they care about is finding their pet that they love. They want that hope back in their lives and we’re trying to provide that.”

Jessica Pierce, a Lyons, Colorado-based bioethicist who studies end-of-life issues involving humans and their pets, said losing a beloved animal and a home is a double whammy of grief.

“To then be reunited with a pet you thought was gone, that would be like getting a piece of your home back,” she said. “For many people, pets are a sense of home, and they identify home with a sense of comfort and peace.”

Steve and Susan Cortopassi were reunited with their cat, Big Ernie, on Oct. 3, more than two months after the fire started. Their other cat, Elsa, was found about three weeks after the fire, which destroyed their home of 30 years.

The Cortopassis had to evacuate in the middle of the night. They grabbed their two dogs but weren’t able to track down the cats. A friend showed Cortopassi cellphone video of her destroyed home a couple days after the fire and she figured the cats were gone forever.

“It was just complete and utter devastation,” she said. “It’s just a miracle they’re alive. It’s like, life finds a way.”

Rhodes got her call on Sept. 2, 41 days after the fire began. Bella, who is 2, had some burns on her belly, her long black hair was singed to medium length and she was underweight. Her formerly gray paws are now permanently pink.

“We have friends that don’t even like cats thinking how crazy we were and we just said, ‘They’re part of our family,’” Rhodes said. “I lost a lot. Thank goodness we did get Bella back because our hearts were just sunken.”