Deadly accident on I-580

A Mercedes spun out on the road, and a pickup slammed into it, CHP Officer Alex Edmon said. Both drivers got out of their vehicles and just then, a sedan struck the pickup driver who was standing on the side of the road, Edmon said. The driver was thrown to the eastbound side of the freeway, where he was pronounced dead. Edmon said rain was definitely the primary cause of this fatal accident.

OAKLAND, Calif. - A pickup driver died early Wednesday morning on Interstate Highway 580 during a rainy commute after he got into an accident with two other cars and got out of his vehicle to wait for help, according to the California Highway Patrol.

CHP Officer Chris Borer said the accident between the Chevy pickup and a Toyota Camry was first reported just after 4 a.m. on the westbound side just east of Lakeshore Avenue. Originally, the CHP had reported the Camry was a Mercedes.

The Camry driver pulled to the right shoulder and the Chevy was thrown sideways between the number 1 and 2 lanes, Borer said. The Chevy driver got out of his truck and walked around to the passenger side of vehicle. At 4:10 a.m., the driver of a Hyundai sedan struck the Chevy, which was blocking lanes, Borer said.

The jolt from that collision propelled the Chevy into the truck driver on the side of the road, throwing him from one side of the freeway to the other, according to the CHP. He was pronounced dead at the scene.

CHP Officer Alex Edmon said rain was definitely the primary cause of this fatal accident. All the remaining drivers stayed on scene.

"Be cautious and try to get to the right hand shoulder if there is one," he said.

Both directions of Interstate Highway 580 are currently blocked as the California Highway Patrol investigates a vehicle vs. pedestrian collision on Dec. 18, 2019 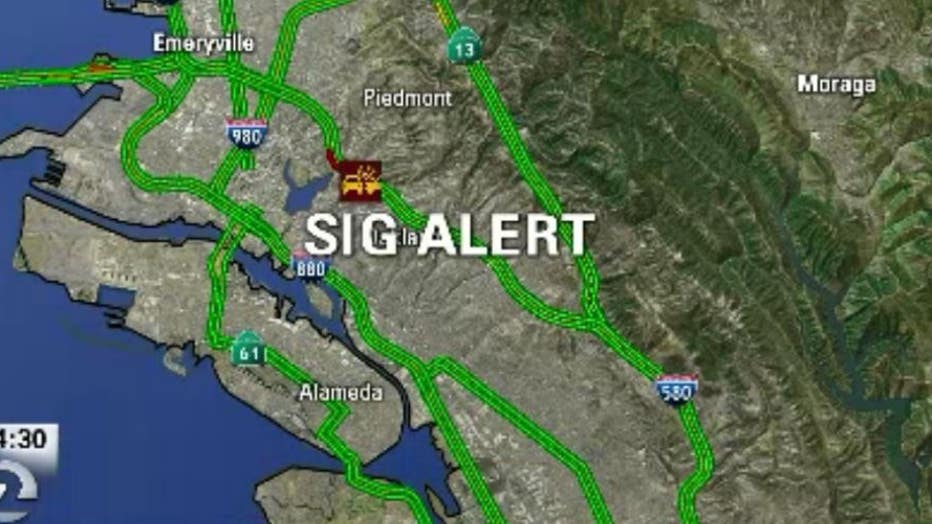