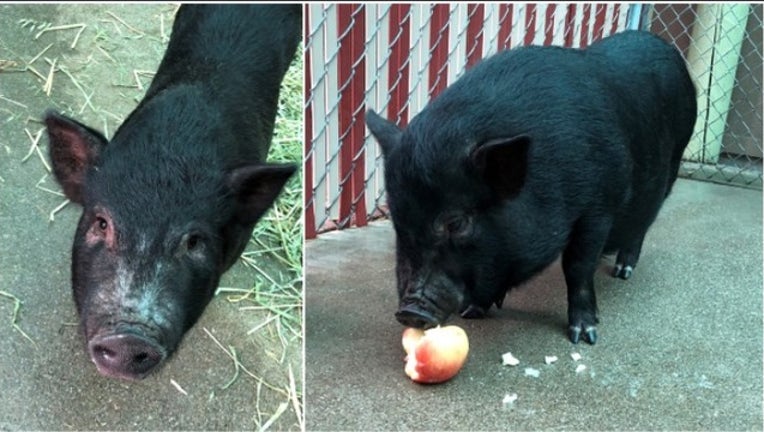 A female pig named Piggy Smalls was found wandering around East Palo Alto earlier this month and now she is up for adoption. Courtsey: Peninsula Humane Society & SPCA.

(BCN) - A stray pig found wandering the streets of East Palo Alto earlier this month is now up for adoption, according to the Peninsula Humane Society & SPCA.

The female adult pig, which PHS/SPCA staff named Piggy Smalls, is the third pig that they have taken in this year.

"We are committed to finding her a loving home where she will be kept as a pet, not a source of food, just like the other two pigs we received earlier this year," communications manager Buffy Martin Tarbox said in a news release.

East Palo Alto police officers found Piggy Smalls in a residential area near the intersection of Alberni Street and Laurel Avenue on Nov. 8.

Officers brought the pig to the humane society. No one came to claim her so she is now up for adoption.

PHS/SPCA veterinarians do not know Piggy Smalls' age and it is possible that she will grow larger. Those considering adopting her must have enough space for her.

Tarbox said Piggy Smalls is "extremely friendly and will make a wonderful pet for someone who has the space she'll need to thrive and live a happy life."

She said Piggy Smalls is very fond of apples.

Her adoption fee is $100 and people who are interested in adopting her may call the PHS/SPCA at (650) 240-7022. Other exotic animals up for adoption include an iguana, a pigeon and two pythons, among others.