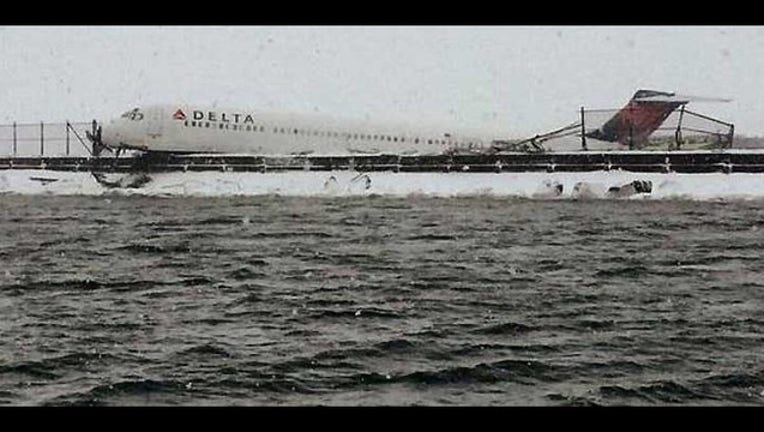 NEW YORK (AP) — A plane from Atlanta skidded off a runway at LaGuardia Airport while landing Thursday, crashing through a chain-link fence and coming to rest with its nose perilously close to the edge of an icy bay.

Photos showed the nose of the plane resting on a berm that separates the runway from Flushing Bay. Passengers saddled with bags and bundled up in heavy coats and scarves slid down an inflated chute to safety on the snowy pavement.

Emergency responders are still assessing people, and one person was seen getting into an ambulance at the airport.

Images show the plane resting in several inches of snow. Passengers trudged through the snow in an orderly line after climbing off the plane.

Among them was New York Giants tight end Larry Donnell, who said he felt blessed to be safe after the scary landing.

"I feel fine physically and hopefully all the other passengers did not have any significant injuries," Donnell said in an email. "We were all shocked and alarmed when the plane started to skid, but most importantly, as far as I know, all of the passengers and flight crew were able to exit the plane safely."

Michael J. Moritz Jr., a well-known Broadway producer, said he was commenting on the heavy snow on the runway when he saw the plane come in for a landing.

"Landing looked normal, didn't look abnormally rough at all," Moritz wrote in an email. "Once on the ground, the plane lost control very quickly, visibility was low."

Atlanta-based Delta Air Lines said passengers were bused to a terminal and it is working with authorities to figure out what caused the crash.

Both the airport's runways are closed until further notice, which is standard procedure after such incidents.

The National Transportation Safety Board is sending an investigator to the scene to secure the plane's flight data and cockpit voice recorders and to document damage to the plane and other evidence, said spokeswoman Kelly Nantel.

The Delta flight was landing on LaGuardia's main runway — a stretch of pavement that is 7,003 feet long and 150 feet wide. On the right side of the runway are a taxiway and the airport terminals. On the left is a berm, fence and Flushing Bay.

In 2005, a safety buffer was added to the end of the runway at LaGuardia, according to the Federal Aviation Administration. It was updated just last year. Called an engineered material arresting system, the buffer is typically a crushable material that can extend 1,000 feet beyond the runway. It is designed to slow or stop a plane that overruns, undershoots or veers off the side of the runway.

The tires of the aircraft sink into the lightweight material and the aircraft is slows as it rolls through the material.

In the case of Flight 1086, it appears that the jet didn't end in the buffer zone but instead veered off the runway and into the berm separating the airport from Flushing Bay.

LaGuardia is one of the nation's most-congested airports. It's also one of the more difficult ones to land at due to its close proximity to three other busy airports. When rain or snow reduces visibility, the number of landings slows down. The same occurs during high winds.

John M. Cox, who spent 25 years flying for US Airways and is now CEO of consultancy Safety Operating Systems, notes that LaGuardia's runway is "reasonably short" but still safe.

At airports with longer runways, pilots will glide a few feet above the runway and gently touchdown. At LaGuardia, "you put the airplane on the ground and stop it."

"You're concentrating on getting your plane on the runway and stopped," Cox says.

The airport has had its share of planes mishaps. In July 2013, the front landing gear of a Southwest Airlines flight arriving at the airport collapsed right after the plane touched down on the runway, sending the aircraft skidding before it came to a halt. Ten passengers had minor injuries. Federal investigators found that the jet touched down on its front nose wheel before the sturdier main landing gear in back touched down.