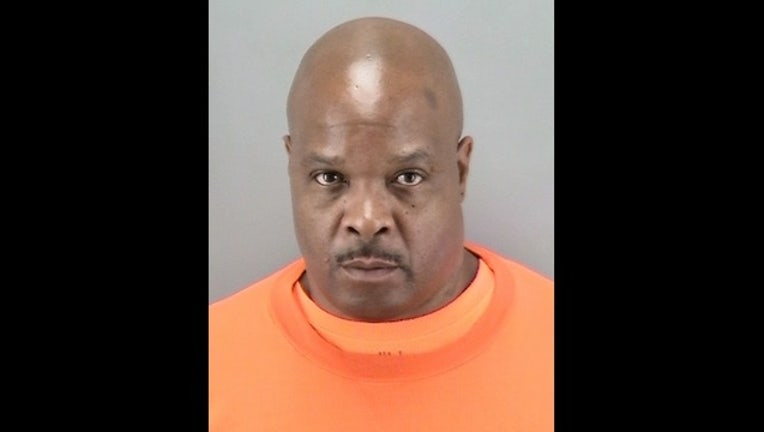 Michael Sweets, 47, was arrested Tuesday on suspicion of multiple counts of robbery, felon in possession of a firearm, kidnapping and a parole violation, according to police. Officers caught up with him at a Fairfield store in the 700 block of Fifth Street around 2:20 p.m.

Sweets was taken to San Francisco, where he was booked into the county jail, police said.

The first robbery associated with Sweets occurred on Feb. 18 around 7:19 p.m., at a market in the 4100 block of 17th Street, according to police. When officers responded to a call from the market, the 28-year-old victim told them a suspect with a shotgun had demanded money.

The frightened victim opened the cash register and gave cash to the suspect, who fled in a gold-colored sedan driven by another suspect, police said.

The second robbery happened two days later, on Feb. 20, around 10:27 p.m. at a store on the 5500 block of Mission Street. The victim, a 41-year woman, told officers the suspect pointed a handgun at her and demanded money, according to police.

The clerk opened the cash drawer and the suspect grabbed the cash and fled, running eastbound on Guttenberg Street, according to police. The Night Investigation Unit took over the investigation, police said.

Four days later, around 9:18 p.m. on Feb. 24, officers responded to a call from a store on the 600 block of Monterey Boulevard.

The victim, a 35-year-old man, told officers he was working in the store when the suspect demanded money. The employee looked up and saw the suspect pointing a shotgun at him.

The victim backed away from the cash register and the suspect grabbed cash and ran, police said.

Officers recognized the suspect's description as similar to the suspect in earlier robberies, and the SFPD Night Investigation Unit took over the case.

Three days later, investigators located Sweets in a gold-colored sedan stopped at a store on the 700 block of Fifth Street. Officers were able to take Sweets into custody without incident, police said.

Though an arrest has been made, the investigation is ongoing and anyone with information is asked to call the police department's tip line at (415) 575-4444 or text a tip to TIP411 and begin the text message with SFPD. Callers and texters may remain anonymous.