Protest outside Oakland City Hall over treatment of homeless

OAKLAND, Calif. - Oakland police cleared out a group of homeless activistis just after midnight on Monday just outside of City Hall.

Police said the group had violated the city's curfew and some activists had to be physically carried away. City workers broke down tents and tossed them into the back of a truck. Roughly a dozen people were detained and their hands were cuffed in zip ties, according to witnesses.

The move by police follows what had been a mostly peaceful protest first set up Sunday at noon by a group called Housing Justice Village at Frank Ogawa Plaza near Oakland City Hall. Activists set up  camp to provide a safe place for the city's homeless population and protest what organizers say are civil and human rights violations committed by the city.

The activists are calling for an end to what they say are "cruel and inhumane anti-homeless practices" by the city, including eviction and demolition of camps, and towing of recreational vehicles.

The village camp at City Hall is intended "to create space to give our folks the opportunity for some healing after all the trauma and brutality we have all endured," said Housing Justice Village founder Needa Bee.

The camp opened with about 18 people who Bee said have nowhere else to go, along with both "housed and unhoused" supporters. "We're tired of being pushed around and treated like we're not human," Bee said, adding that "People are welcome to come down and find out how they can plug in" to help the effort. 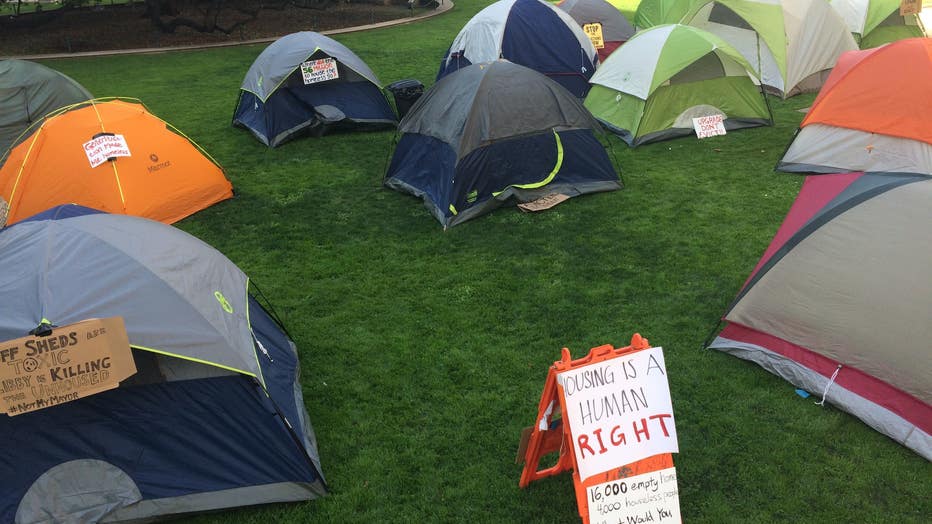 "We're here to protest on behalf of unhoused folks and ask questions" about funding and solutions the group says were approved two years ago but have not been implemented. The homeless population in Oakland has doubled during that time, Bee said.

"We call it a village, but it's definitely bigger than just a village," Bee said. "The reality is the mayor (Libby Schaff) has an amazing PR machine and we want to utilize this time to get the truth out."

On Monday, the city of Oakland said that city staff had told the 20 or so protesters they couldn't camp on city property over night but that they could erect the tents during the daytime. The city also provided them with options at St. Vincent Paul, a city spokeswoman said. One person asked for that help, the city said.

After hours of negotiations, 22 people were arrested for trespassing and resisiting arrest, the city said. Nine people had Oakland addresses.

In a statement, Oakland Mayor Libby Schaaf said: "Housing and homelessness are the most urgent crises facing our community, region, and state. Our shared priority is to create more safe shelter spaces for our unsheltered residents and build more affordable housing immediately. Oakland supports every resident’s right to free speech and to protest peacefully in our city.”

Oakland police move people out of tents who are camped out on City Hall. Nov. 25, 2019