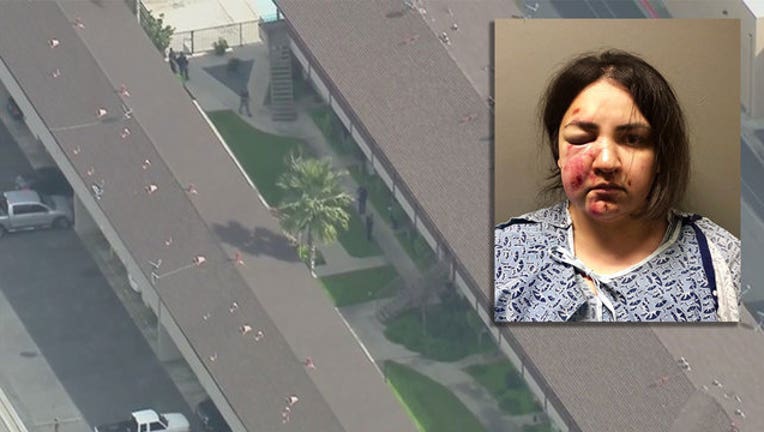 Tierra Rosa Ortega, 24, has been charged with homicide and related offenses.

UPLAND, Calif. (FOX 29) - A mother suspected of killing her 6-month-old daughter, then throwing or dropping her young son from a second-story apartment building and jumping herself faces a murder charge while investigators hunt for a motive, police said.

Twenty-four-year-old Tierra Rose Ortega and her 1 ½-year-old son were hospitalized in stable condition after Upland police were called to the apartment east of Los Angeles on Tuesday morning, Capt. Marcelo Blanco said.

Officers went to the apartment building after a neighbor called 911 to report that a child was screaming or crying, and then she noticed that the woman was holding the child over a second-story landing, Blanco said.

"She proceeded to drop the child down from the second story," the captain said. "From what we gather, it was an intentional act, it wasn't accidental."

The boy fell about 12 to 15 feet, suffering a broken foot, and the mother jumped when officers arrived, Blanco said. She landed face down, suffering facial injuries.

Police then made a safety check of the second-story apartment and found the woman's approximately 6-month-old daughter inside. She wasn't breathing.

Her breathing was restored but she died at a hospital, Blanco said.

The cause of her death will be determined but she had a possible skull fracture and internal injuries, he said.

Ortega was arrested and charged with homicide, attempted homicide and corporal injury on a child causing great bodily injury.

Video from KCAL-TV showed the Ortega sitting on grass outside the building with her hands handcuffed behind her. One child, strapped to a board, was loaded into a helicopter for the flight to the hospital.

The children's distraught father was called home from work and police had to hold him back as he struggled to climb the stairs to the apartment.

He spoke to police but "has no idea what led to this," Blanco said.

The property manager said the family had moved into the unit about a year ago, KCAL-TV reported.

"I would have never thought that she would be capable of doing anything like that but you know, mothers go through postpartum depression, it's a real thing," a neighbor, Kaeleigh Calderon, told the station.