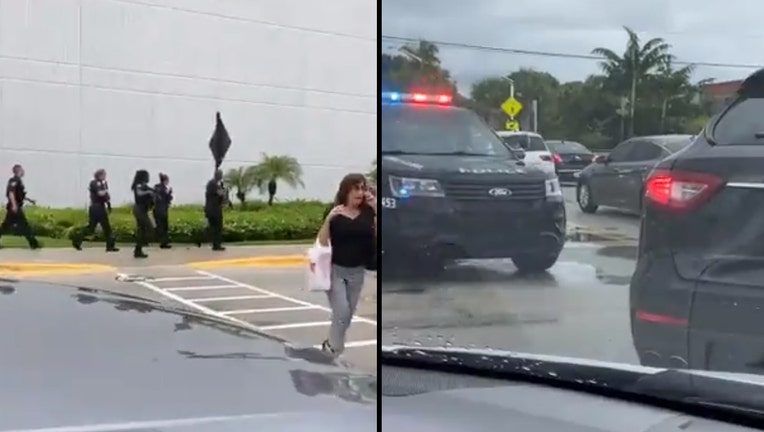 BOCA RATON, Fla. - Reports of possible shots at an upscale Florida mall sent panicked people running and triggered a lockdown for several hours Sunday, but a SWAT team's search found no evidence of any shooting and police issued an all-clear after nightfall.

One person was injured, apparently leaving the mall in Boca Raton, police said.

Boca Raton Police Chief Dan Alexander said Sunday evening that authorities conducted a sweeping search but found no evidence to confirm the initial reports. Nonetheless, he said, investigators were still scouring mall surveillance video, seeking to pinpoint the source of an apparent loud noise that panicked mallgoers into an afternoon exodus from the Town Center at Boca Raton.

Shortly after 9:30 p.m. Sunday night, more than six hours later, authorities tweeted that "There is no longer a threat" and that employees and mallgoers could return to retrieve belongings and vehicles they left behind.

Soon after receiving the initial reports Sunday afternoon, police tweeted for those still in the mall to shelter in place as a lockdown took hold. The agency subsequently tweeted that a SWAT team had entered the mall for an exhaustive search and it subsequently advised that no active shooter was present.

"Some noise went off. We have not recovered any shell casings, or any rounds of ammunition. We are characterizing it as a suspicious incident," the chief told a news briefing Sunday evening.

Alexander also said one person police previously tweeted as having a possible gunshot wound had, in fact, a traumatic injury from apparently "hitting his head on the door" as he attempted to leave. The man was being treated at a medical center, the chief said, declining to identify the person or discuss his injuries further.

Some people posted video on social media showing what they said were cars streaming away from the mall as armed police arrived. Other online posts showed footage of people hurrying away on foot.

Though many left the mall immediately Sunday afternoon, some were still inside hours later as they still awaited evacuation, Alexander said. He urged those still inside to remain patient while police continued an exhaustive search to "clear every single space."

"A lot of people have been waiting patiently to get out," he said of those who sheltered in the mall until police gave the all-clear Sunday night.

Alexander said authorities still are trying to pinpoint exactly what set off the disturbance. He said no suspects had been identified and urged anyone with information to call a public tip line.

Federal, county and other law enforcement agencies were called in to assist in the search and investigation, he said.

Boca Raton is a city on Florida's southeast Atlantic coast about 45 miles (70 kilometers) north of Miami.