NEW YORK - The coronavirus pandemic has put millions of Americans out of work. But many of those still working are fearful, distressed and stretched thin.

A quarter of U.S. workers say they have even considered quitting their jobs as worries related to the pandemic weigh on them, according to a new poll by The Associated Press-NORC Center for Public Affairs Research in collaboration with the software company SAP. A fifth say they have taken leave.

About 7 in 10 workers cited juggling their jobs and other responsibilities as a source of stress. Fears of contracting the virus also was a top concern for those working outside the home. 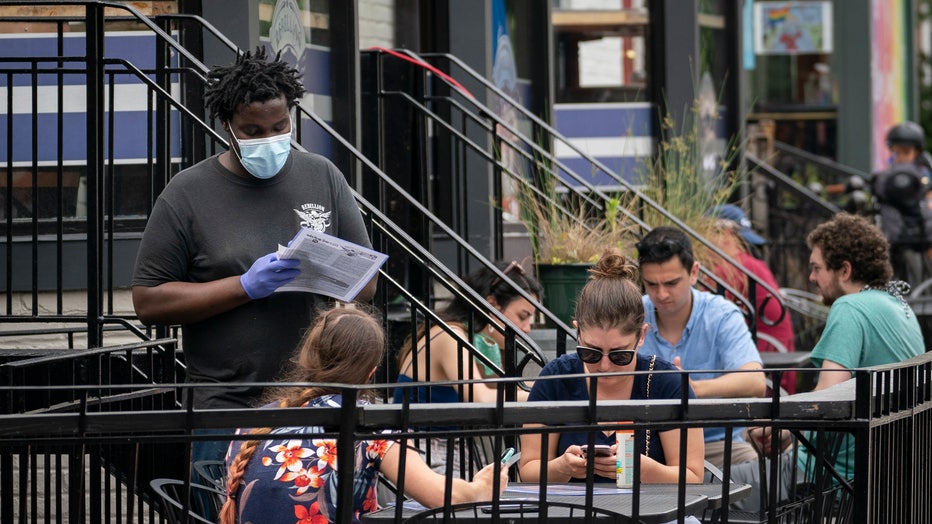 FILE - A waiter wears a mask and gloves as he takes customers' orders at a restaurant in the Adams Morgan neighborhood in Washington, DC on May 29, 2020. (Photo by Drew Angerer/Getty Images)

The good news is that employers are responding. The poll finds 57% of workers saying their employer is doing “about the right amount” in responding to the pandemic; 24% say they are “going above and beyond.” Just 18% say their employer is “falling short.”

That satisfaction seems largely related to physical protections from the virus, which overwhelming majorities of workers considered very important. Still, at least half also say it is very important for their employers to expand sick leave, provide flexibility for caregivers and support mental health, and workers report less satisfaction with efforts in these areas.

Lower income workers were especially likely to have considered quitting — 39% of workers in households earning less than $30,000 annually versus just 23% in higher income households. 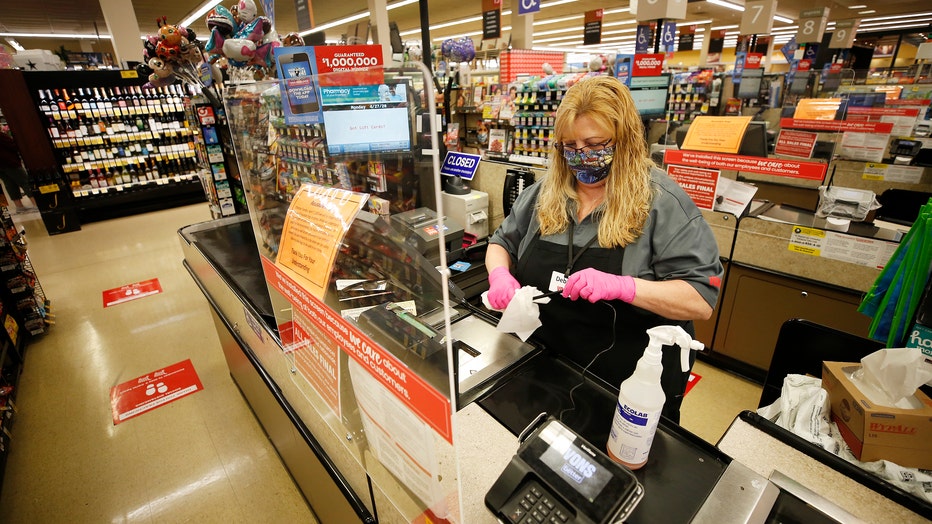 John Roman, a senior fellow at NORC at the University of Chicago, said those findings likely reflect fears of exposure of the virus among those who can’t work from home. Hourly wage workers are also less likely to feel attachment to a job, making them more likely to search for safer work, he said.

“This is perhaps the most surprising finding,” Roman said. “The people who can least afford to lose their jobs are leaving jobs in higher numbers. But it fits with the story that they feel unsafe health-wise.”

While 65% of remote workers say their employers are doing a good job protecting their health, just 50% of those working outside the home say that.

The pandemic is weighing heavily on women and people of color, who are most likely to work in essential jobs they can’t do remotely.

Fifty percent of women call the pandemic a major source of stress in their lives, compared to 36% of men. Sixty-two percent of Black workers and 47% of Hispanic workers say it is, compared to 39% of white workers.

Jamelia Fairley, a single mother who works at a McDonald’s in Florida, said managers initially told her to make masks out of coffee filters and hairnets. Although she now gets protective gear, she said workers often have to serve customers who refuse to wear masks.

“I feel like they should provide us with better protection by having the masks be mandatory, not just for us but for customers,” said Fairley, who has seen her weekly hours cut nearly in half and has joined a strike to support raising Florida’s minimum wage to $15 an hour.

Federal labor figures point to a trend of working-age women, particularly Black and Hispanic women, increasingly dropping out of the labor force amid a child care crisis caused by school and daycare closures.

Many top companies have responded with an array of programs, from increased leave to stipends for child care or tutors, but those benefits are not reaching the vast majority of America’s workers.

Nearly 7 in 10 workers consider flexibility for caregivers very important. Fewer than half — 44% — said their employers were doing a good job of that, though just 18% rated employers poorly; another 37% called the response neither good nor bad.

Sarah Blas, a single mother of six in New York, said she has dropped a third of her projects at a non-profit since her children started going to school remotely because some of them have severe asthma.

“It’s soul crushing,” said Blas, though she is grateful that her employer has allowed her to scale back. “There’s even more work to do now, and I literally have to say no because I’m home-schooling.”

The poll finds 28% of workers report working fewer hours since the pandemic hit, which could be because they are juggling responsibilities or because employers have cut back their hours. Among Black workers, the number rises to 38%.

Jeff Huffman, who works as a water infrastructure inspector in Ohio, said his company cut all his overtime hours because they have stopped sending workers out to cut water from households behind on their bills. That has left him struggling to pay child support and worried about giving a proper Christmas to his school-age sons, who live with him every other weekend.

Huffman, who has asthma and worried about virus exposure, said he has applied for other jobs “out of anxiety and stress.” Huffman said he is disappointed that the company has failed to reach out to give “a little gratitude for the hard work we are doing under all this stress.”

“They really just haven’t check in to see how we are doing. I just feel like like it’s all about money,” Huffman said.

The poll shows pandemic-related support varies by company size. Workers at companies with fewer than 100 employees were less likely than those at larger companies to praise how their employers have handled many responsibilities during the pandemic.

Juan Mercado, truck driver for a company that employs more than 1,000 people, said his employer has offered counselling, protective equipment, expanded sick leave and paid time off to care for sick relatives.

“That gave us the confidence to continue working because otherwise, I would probably say I don’t want to go,” said Mercado, 67, of Corpus Christie, Texas.

The AP-NORC survey of 1,015 full- and part-time employees was conducted Sept. 11-16 with funding from SAP. It uses a sample drawn from NORC’s probability-based AmeriSpeak Panel, which is designed to be representative of the U.S. population. The margin of sampling error for all respondents is plus or minus 4.2 percentage points.