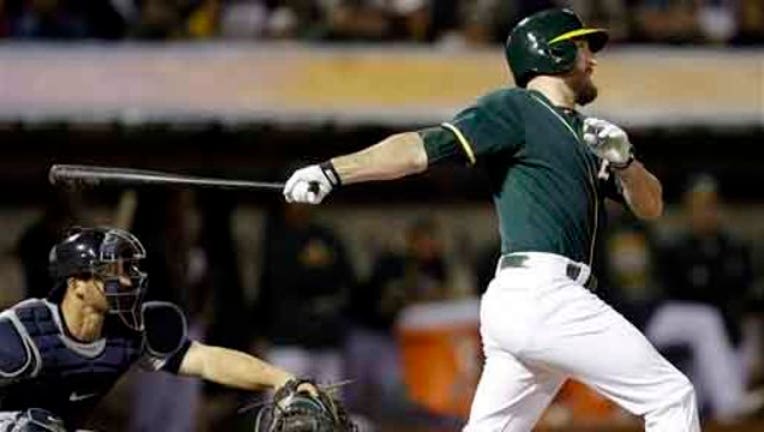 The A's continued their pattern of an on-again, off-again offense by knocking around Mariners starter Taijuan Walker and three relievers. In its three wins this season, Oakland has outscored its opponents 30-0.

Canha, who came within inches of hitting a grand slam on Wednesday, went 3 for 5. He reached on an infield single and scored on Ben Zobrist's double in the first. His homer off Walker in the second came on a 2-0 pitch and landed halfway up the bleacher seats in left.

Pomeranz (1-0) beat out Jesse Chavez for the fifth spot in the A's rotation and showed why in his first start of the season. He gave up just two hits and faced only one batter over the minimum through seven innings.

The Oakland left-hander struck out six and didn't allow a baserunner until Austin Jackson's single to left with one out in the fourth. He promptly got Robinson Cano to hit into a double play on the next pitch, then set down the next seven Mariners.

Fernando Abad pitched the eighth while R.J. Alvarez worked the ninth to complete the shutout.

Mariners: OF Seth Smith sat out his third straight game with a groin strain but manager Lloyd McClendon is hopeful of getting Smith back in the lineup Saturday.

Athletics: The team has pushed back plans to activate OF Josh Reddick from the disabled list. Reddick will play at least one more game in the minors before rejoining the big league club. ... Closer Sean Doolittle has extended his long toss workouts to 90 feet. ... LHP Barry Zito gave up five runs and 10 hits in his first minor league start for Triple-A Nashville.

Mariners: RHP J.A. Happ makes his Seattle debut on Saturday against Oakland. The former Toronto Blue Jays pitcher won his only start against the A's in 2014.

Athletics: RHP Sonny Gray (1-0) makes his second start of the season and eighth of his career against Seattle. Gray carried a no-hitter into the eighth inning against Texas on opening day and has an 18-inning scoreless streak going.