Pope Francis held a massive open mass on his last day in Slovakia. Organizers say 60,000 people went to Our Lady of Sorrows national Shrine during the ongoing coronavirus pandemic. The Pontiff urged Slovakians to look out for the neediest among them. Each Sept. 15th, pilgrims from Slovakia and beyond flock to Sastin on the feast day of Slovakia’s patron.

Pope Francis said Wednesday he didn’t understand why people refuse to take COVID-19 vaccines, saying "humanity has a history of friendship with vaccines," and that serene discussion about the shots was necessary to help them.

"Even in the College of Cardinals, there are some negationists," Francis said Wednesday, en route home from Slovakia.

He noted that one of them, "poor guy," had been hospitalized with the virus. That was an apparent reference to U.S. Cardinal Raymond Burke, who was hospitalized in the U.S. and placed on a ventilator last month after contracting the virus.

Francis was asked about vaccine skeptics and those who oppose vaccine mandates by a Slovakian reporter, given that some events during his four-day pilgrimage to the country were restricted to people who had gotten COVID-19 jabs. The issue is broader, however, as more and more governments adopt vaccine mandates for certain categories of workers, sparking opposition.

"It’s a bit strange, because humanity has a history of friendship with vaccines," Francis said, noting that children for decades have been vaccinated against measles, mumps and polio "and no one said anything."

He hypothesized that the "virulence of uncertainty" was due to the diversity of COVID-19 vaccines, the quick approval time and the plethora of "arguments that created this division," and fear. Medical experts say vaccines have been tested and used on tens of millions of people and have been proven to be effective in reducing serious hospitalizations and deaths.

Significantly, Francis didn’t cite the religious objection used by some who refuse the vaccines. Some conservatives have refused to get the shots citing the remote and indirect connection to lines of cells derived from aborted fetuses. 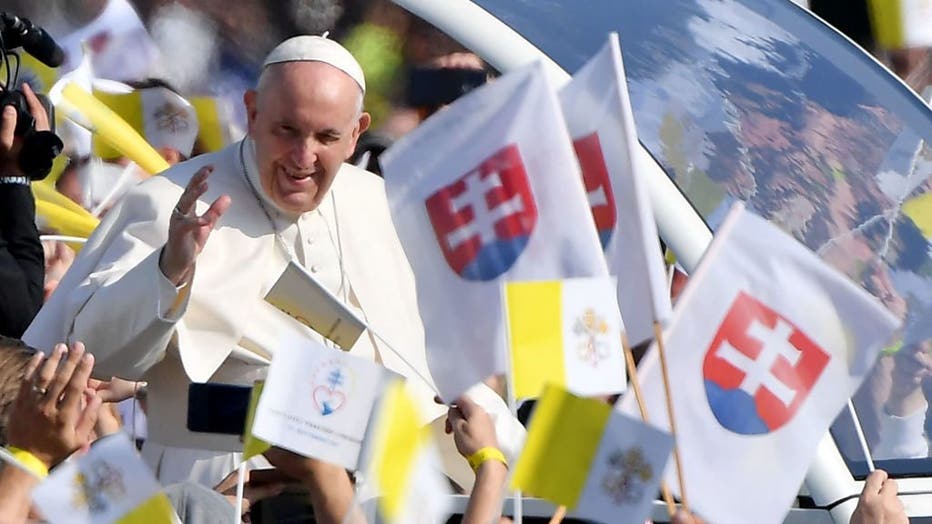 Pope Francis waves from an open vehicle to greet the faithful celebrating a Byzantine divine liturgy on Sept. 14, 2021 in Presov near Kosice, Slovakia. (Photo by TIZIANA FABI/AFP via Getty Images)

The Vatican’s doctrine office has said it is "morally acceptable" for Catholics to receive COVID-19 vaccines based on research that used cells derived from aborted fetuses. Francis has said it would be "suicide" not to get the jab and both Francis and Emeritus Pope Benedict XVI have been fully vaccinated with Pfizer-BioNTech shots.

Francis noted that the Vatican had vaccinated its residents, staff and their families "with the exception of a very small group" and "they’re studying how to help them."

For those who are still afraid, he said: "They have to clarify that and talk with serenity."