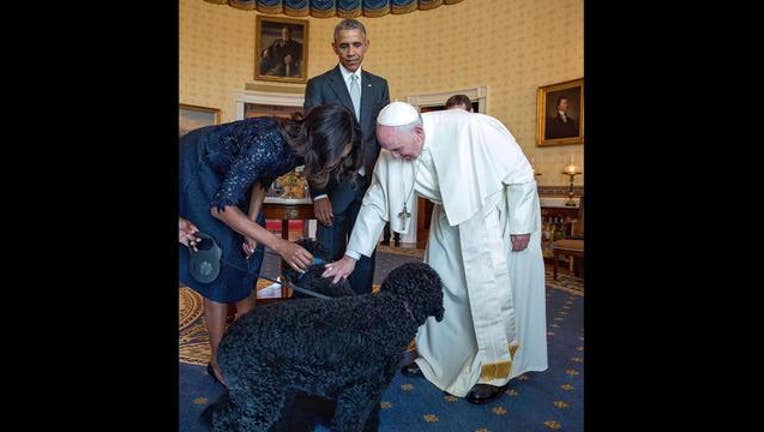 WASHINGTON - It was a whirlwind day for Pope Francis in Washington D.C. on Wednesday. He began his day by visiting  President Barack Obama at the White House in the morning.

Apparently, the pontiff is a fan of dogs as he met two of the most famous pets in the country -- Bo and Sunny!

White House photographer Pete Souza captured the meeting between Francis and the Obamas' Portuguese water dogs during his visit in the Oval Office.

During the second day of visit in the nation's capital, Pope Francis spoke to a large crowd on the South Lawn of the White House, met with U.S. bishops at the Cathedral of St. Matthew the Apostle, traveled on a parade through the streets of D.C., and celebrated Mass at the Basilica of the National Shrine of the Immaculate Conception.

On Thursday, Francis is scheduled to speak at a joint meeting of Congress and give blessings and remarks to the clients and homeless at lunchtime for the St. Maria Meals Program of the Catholic Charities for the Archdiocese of Washington before departing for New York at 4 p.m.