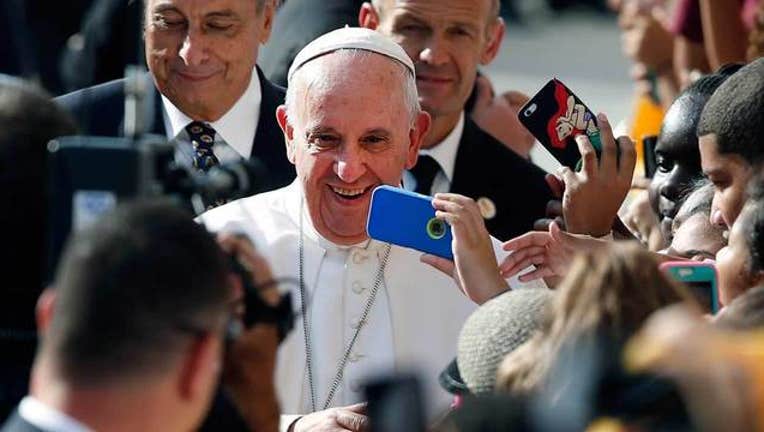 NEW YORK (AP) — Sweeping through the landmarks of America's biggest and brashest city, Pope Francis on Friday offered comfort to families of the 9/11 victims at ground zero, warnings to world leaders at the United Nations, and encouragement to children — many of them immigrants — at a Catholic school in East Harlem.

In the early evening, he led a jubilant parade through Central Park, smiling as he rode slowly in his open-sided Jeep past a cheering, shrieking crowd estimated at 80,000, many of them holding cellphones aloft in a sea of arms.

He then celebrated an evening Mass at Madison Square Garden for about 18,000 people — the final event of the New York leg of his six-day, three-city visit to the U.S.

During his visit to New York, the pope mingled with both the powerful and the ordinary, drawing huge, adoring crowds while also managing to connect one-on-one with countless New Yorkers, despite extraordinarily tight security.

"As he passed by, you passed a cool, refreshing peace, as if he were spreading a huge blanket of peace through the crowd," Ruth Smart of Brooklyn said of the procession in Central Park. "Even though the crowd exploded in a roar, it was pure joy."

In his speech at the U.N., the pope decried the destruction of the environment through a "selfish and boundless thirst for power and material prosperity."

The environment itself has rights, and mankind has no authority to abuse them, said Francis, who hopes to spur concrete commitments at the upcoming climate-change negotiations in Paris.

He demanded immediate access for the world's poor to adequate food, water and housing, saying they have the right to lodging, labor and land.

The ovations contrasted sharply with the moment of silent prayer during the pope's visit later in the day to ground zero for an interfaith tribute to the Sept. 11 victims.

After praying before the waterfall pools that mark the spot where the twin towers once stood, Francis met with relatives of the 3,000 victims whose names are inscribed on the waters' edge.

Moving into the underground memorial museum, he joined a rabbi, an imam and other faith leaders to pray for peace, standing in front of the floodwall that became a symbol of New York's resilience when it held fast after the attacks.

Among those on hand was Monica Iken-Murphy, whose husband, bond trader Michael Patrick Iken, died in one of the towers.

"This is where loved ones lost their lives ... and this is the way we are going to honor them by having someone who is holy, closest to God, Pope Francis, come here and bless this site," Iken-Murphy said. "I couldn't be prouder to share this memorial and museum with him."

Francis' afternoon schedule reflected the penchant of the "people's pope" for engaging with the public, starting with a visit to Our Lady Queen of Angels School, set amid public housing in the heavily Hispanic neighborhood of East Harlem.

A line of children shrieked and chanted, "Holy Father, we love you!" as he made his way along a barricade outside the school. A beaming pope blessed them, shaking hands and posing for a few selfies. Some children embraced him, but a security guard intervened when one girl gave him a big hug.

After the morning's deadly serious activities, the 78-year-old pope clearly perked up when he got to Harlem. He joked around with the children and chatted happily with them in Spanish.

The pope — who says he hasn't watched TV in decades and doesn't know how to work a computer — even got a lesson in how to use a touchscreen from fourth-grader Kayla Osborne. The 8-year-old guided his hand to show him how it worked.

The crowd in the gym included about 150 immigrants and refugees, some of them in the U.S. illegally.

In his remarks, Francis recalled the Rev. Martin Luther King Jr.'s "I Have a Dream" speech, saying: "His dream was that many children like you could get an education. It is beautiful to have dreams and to be able to fight for them."

About a half-hour before the popemobile passed through Central Park, a rainbow suddenly appeared above the crowd, which erupted in joyous "Oooohs!" and "Ahhhhhs!"

Denise Villasenor, a 27-year-old Columbia University graduate student from the Philippines and a Catholic, practiced capturing a selfie with the pope ahead of the procession.

"The pope's positions always revolve around compassion and love — you know, being a person for others," she said. "Immigration, the environment, it all comes to being compassionate, for others."

The visit posed huge logistical and security challenges, and many streets were closed off. At the U.N., hundreds of police officers and Secret Service agents were on duty, backed by bomb-sniffing dogs and police boats. For the procession in Central Park, ticketholders were barred from bringing backpacks and other items.

On Saturday morning, the pope flies to Philadelphia for a big Vatican-sponsored rally for Catholic families. As many as 1 million people are expected for the final Mass on Sunday.

The papal visit to the United Nations included a historic moment — the Vatican flag was raised there for the first time. The General Assembly recently agreed to allow the U.N.'s two observer states, the Holy See and Palestine, to fly their flags alongside those of the 193 member states.

Although his U.N. remarks on the environment and the economy carried a message many liberals welcomed, Francis also affirmed church doctrine on abortion and sexuality.

Among other things, he called for the "absolute respect for life in all its stages," including the unborn.