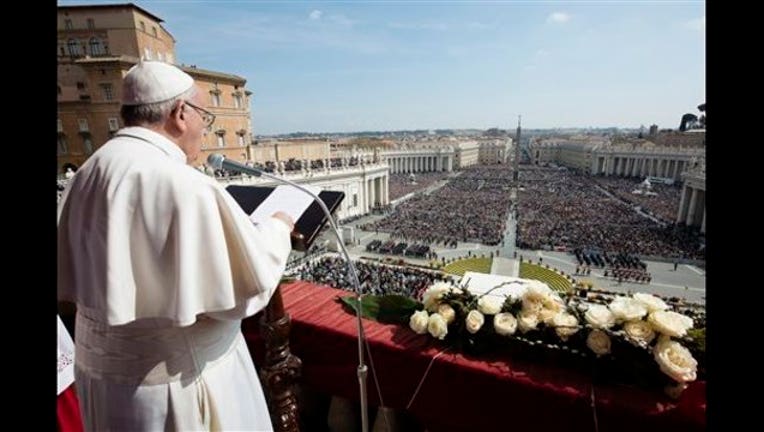 Pope Francis delivers the Urbi et Orbi (to the city and to the world) message at end of the Easter mass, in St. Peter's Square, at the Vatican, Sunday, March 27, 2016. (L'Osservatore Romano/pool photo via AP)

VATICAN CITY (AP) - Pope Francis said Friday that Catholics should look to their own consciences more than Vatican rules to negotiate the complexities of sex, marriage and family life, demanding the church shift its emphasis from doctrine to mercy in confronting some of the thorniest issues facing the faithful.

In a major church document entitled "The Joy of Love," Francis made no explicit change in church doctrine and upheld church teaching on the lifelong bond of marriage between a man and a woman.

But in selectively citing his predecessors and emphasizing his own teachings in strategically placed footnotes, Francis made innovative openings in pastoral practice for Catholics who civilly remarry and signaled that he wants nothing short of a revolution in the way priests guide Catholics. He said the church must no longer sit in judgment and "throw stones" at those who fail to live up to the Gospel's ideals of marriage and family life.

"I understand those who prefer a more rigorous pastoral care which leaves no room for confusion," he wrote. "But I sincerely believe that Jesus wants a church attentive to the goodness which the Holy Spirit sows in the midst of human weakness."

On thorny issues such as contraception, Francis stressed that a couple's individual conscience — not dogmatic rules imposed on them across the board — must guide their decisions and the church's pastoral practice.

"We have been called to form consciences, not replace to them," he said.

He insisted the church's aim is to reintegrate and welcome all its members. He called for a new language to help Catholic families cope with today's problems. And he said pastors must take into account mitigating factors — fear, ignorance, habits and duress — in counseling Catholics who simply aren't perfect.

"It can no longer simply be said that all those in any irregular situations are living in a state of mortal sin and are deprived of sanctifying grace," he wrote. Even those in an "objective situation of sin" can be in a state of grace, and can even be more pleasing to God by trying to improve, he said.

Cardinal Christoph Schoenborn, the archbishop of Vienna, told a Vatican press conference that while there was no explicit change in church doctrine about the family, the document contained an "organic development" in church teaching.

"It's the classic case of an organic development of doctrine. There is innovation and continuity," he said. "There are true novelties in this document, but no ruptures."

The document's release marks the culmination of a divisive two-year consultation of ordinary Catholics and the church hierarchy that Francis initiated in hopes of understanding the problems facing Catholic families today and providing them with better pastoral care.

The most controversial issue that arose during two meetings of bishops, or synods, was whether Francis would loosen the Vatican's strict opposition to letting Catholics who divorce and remarry receive Communion. Church teaching holds that unless these Catholics receive an annulment, or a church decree that their first marriage was invalid, they are committing adultery and cannot receive Communion.

Conservatives had insisted that the rules were fixed and that there was no way around Christ's teaching on the indissolubility of marriage. Progressives had sought wiggle room to balance doctrine with mercy and look at each couple on a case-by-case basis, accompanying them on a path of reconciliation that could lead to them eventually receiving the sacraments.

Francis took a unilateral step last year and changed church law to make it easier to get an annulment. On Friday, he said the rigorous response proposed by the conservatives was inconsistent with Jesus' message of mercy.

"By thinking that everything is black and white, we sometimes close off the way of grace and of growth and discourage paths of sanctification which give glory to God," he said. "Let us remember that a small step in the midst of great human limitations can be more pleasing to God than a life which appears outwardly in order but moves through the day without confronting great difficulties."

Francis didn't explicitly endorse the "penitential path" of bringing such civilly remarried Catholics to Communion that was advocated by leading progressives such as Cardinal Walter Kasper. But he repeated what the synod had endorsed of the need for pastors to help individual Catholics over the course of spiritual direction to ascertain what God is asking of them.

And he went further by explicitly linking such discussions of conscience with access to the sacraments.

In a footnote, Francis cited his previous document "The Joy of the Gospel" in saying that confession should not be a "torture chamber" and that the Eucharist "is not a prize for the perfect but a powerful medicine and nourishment for the weak."

The Rev. James Bretzke, a Boston College theologian, said the document will give cover to and empower those priests and bishops who want to apply a broader understanding of the confidential discussions between priests and divorced and civilly remarried Catholics — a concept known as the "internal forum solution."

"He does not outlaw that, whereas John Paul II specifically outlawed (it)," he said.

But Mark Brumley, president of Ignatius Press, a major English-language publisher of the writings of retired Pope Benedict XVI, said Francis' emphasis on conscience "doesn't mean this is a free pass to do whatever you want."

He said the document tries to navigate the difficult path of upholding church teaching while allowing the civilly remarried to participate in the life of the church.

In many ways the document is most significant for what it doesn't say.

While Francis frequently cited John Paul, whose papacy was characterized by a hardline insistence on doctrine and sexual morals, he did so selectively. Francis referenced certain parts of John Paul's 1981 "Familius Consortio," the guiding Vatican document on family life until Friday, but he omitted any reference to its most divisive paragraph 84, which explicitly forbids the sacraments for the divorced and civilly remarried.

In fact, Francis went further than mere omission and effectively rejected John Paul's call in that document for people in civil second marriages to live as brother and sister, abstaining from sex so they can still receive the sacraments. In a footnote, Francis said that many people offered such a solution by the church "point out that if certain expressions of intimacy are lacking it often happens that faithfulness is endangered and the good of children suffer."

Similarly, in discussing the need for "responsible parenthood" and regulating the number of children, Francis made no mention of the church's opposition to artificial contraception. He squarely rejected abortion as "horrendous" and he cited the 1968 encyclical "Humanae Vitae," which deals with the issue.

But Francis made no mention of the "unlawful birth control methods" rejected in "Humanae Vitae." Instead he focused on the need for couples in their conscience to make decisions about their family size.

Francis made a single reference to church-sanctioned family planning method of abstaining from sex during a woman's fertile time. He said only that such practices are to be "promoted" — not that other methods are forbidden — and he insisted on the need for children to receive sex education, albeit without focusing on "safe sex."

Remarkably, the lengthy document devotes an entire chapter to love and sex in marriage — at times explicitly. Schoenborn acknowledged that Francis dared address such issues even though bishops and cardinals in two separate synods essentially ignored the question. Schoenborn suggested the celibacy of the synod fathers was perhaps to blame for the omission in their documents.

Gays will likely be disappointed by the documents' failure to offer anything significant beyond existing church teaching that gays are not to be discriminated against and are to be welcomed into the church with respect and dignity. It resoundingly rejects gay marriage and repeats the church's position that same-sex unions can in no way be equivalent to marriage between man and wife.

But women will find much to appreciate in the document. Francis condemns at length the "verbal, physical and sexual violence" many women endure in marriages, rejects "sexual submission" and the "reprehensible" practice of genital mutilation. And he says the belief that feminism is to blame for the crisis in families today is completely invalid.