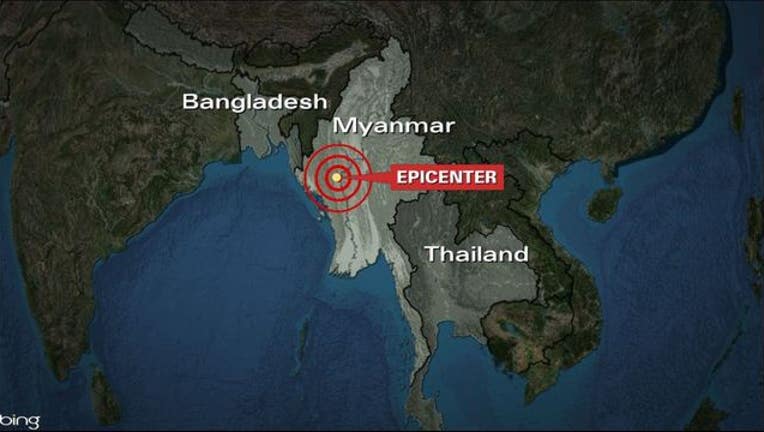 The U.S. Geological Survey said the magnitude 6.8 quake was centered about 25 kilometers (15 miles) west of Chauk, a town south of Bagan. It was located fairly far below the Earth's surface at a depth of about 84 kilometers (52 miles), it said. Deep earthquakes generally cause less surface damage.

At least 185 brick pagodas in Bagan were damaged, the state newspaper reported. Bagan, also known as Pagan, has more than 2,200 structures including pagodas and temples constructed from the 10th to the 14th centuries. Many are in disrepair while others have been restored in recent years, aided by the U.N. cultural agency UNESCO.

The vast site is the country's premier attraction for tourists, who can view a panorama of temples stretching to the horizon flanked by the mighty Irrawaddy River, an especially impressive experience at sunset.

Police officer Htay Win in Pakokku, about 70 kilometers (45 miles) from the epicenter, said one person there had been killed and one injured. "The person was killed by falling bricks from a building," he said.

The Ministry of Social Welfare, Relief and Resettlement reported two other deaths in nearby Thitapwe village.

U.N. spokesman Stephane Dujarric said Secretary-General Ban Ki-moon was "saddened" by the loss of life and damage from the earthquake and expressed his condolences to the "people and government" of Myanmar.

He said the U.N. Office for the Coordination of Humanitarian Affairs was in contact with authorities in Myanmar and along with its partners stands ready to support the government and local organizations "should any humanitarian support be needed."

Vincent Panzani, a staff member in Pakokku for the aid agency Save the Children, said several of his colleagues from the area described the earthquake as the strongest they have experienced.

"We felt quite heavy shaking for about 10 seconds and started to evacuate the building when there was another strong tremor," he said in comments sent by email. "Most of the reports of damage have been to the pagodas in the area with dozens impacted. There have also been reports of damage to smaller, more basic buildings including a collapsed wall and a destroyed roof."

Worried residents of Yangon, the country's main city, rushed out of tall buildings, and objects toppled from tables and from Buddhist shrines in homes. However, there were no reports of serious damage in the city.

The quake was also felt in a half dozen states in neighboring India, where people rushed out of offices and homes at several places. It caused buildings to sway in Bangkok, Thailand's capital, several hundred kilometers (miles) to the east. There were no immediate reports of damage in either country.

The last major quake in the area — which is often affected by smaller tremors — occurred in April about 300 kilometers (180 miles) further north, and measured magnitude 6.9. It caused no reported casualties and only minor damage.