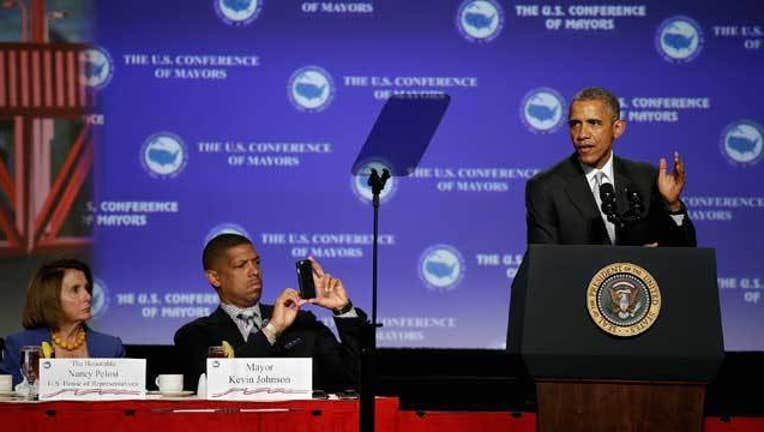 Obama arrived on Air Force One that landed at San Francisco International Airport at 12:57 p.m. to breezy conditions and sunny skies.

He stepped out of the plane about 10 minutes later wearing a black suit and a light blue tie with polka dots.

Obama was met by cheers from a group of roughly 100 family members of the U.S. Secret Service. Many people in the crowd held their cellphones in the air to capture a picture of the president as he shook hands and exchanged words with them.

Briana Branch, 10, said it was "cool" to see Obama for the first time in person and the president complimented her 8-year-old brother's mohawk.

Briana's cousin, 9-year-old Jordan, said he felt "great and important" to see the president and was able to shake his hand.

Obama's handshake was "very firm," according to Jordan.

Jenni Melgoza and her daughter, 7-year-old Mya, were able to catch a glimpse of the president as he shook hands with the crowd.

Mya said it was "amazing" to see the president for the first time. Obama gave a final wave to the crowd before stepping into a Chevrolet Suburban and left in a motorcade that included California Highway Patrol and San Francisco police vehicles.

The president headed from the airport to the 83rd annual U.S. Conference of Mayors at Hilton San Francisco Union Square. The conference, hosted by San Francisco Mayor Ed Lee, will discuss the economic health of U.S. cities.

He is also scheduled to attend a Democratic Congressional Campaign Committee fundraiser with U.S. Rep. Nancy Pelosi, D-San Francisco, at the home of hedge fund manager Tom Steyer and his wife, Kat Taylor.

Democratic National Committee officials said Obama will join a roundtable at the home of venture capitalist Shervin Pishevar, with around 30 supporters attending and donating $33,400 each.

Obama will spend the night in San Francisco before he departs at about 9:40 a.m. Saturday from SFO.

The President's last visit to the Bay Area was in October when he attended a DNC fundraiser in San Francisco.