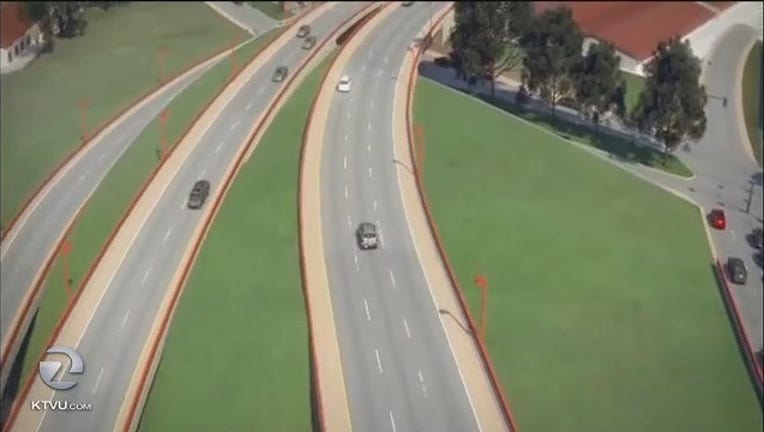 SAN FRANCISCO (KTVU) - Doyle Drive, refashioned as the Presidio Parkway, opened to traffic ahead of schedule on Sunday evening after a 71 hour closure that snarled traffic in and out of San Francisco.

The first vehicles on the 1.5 mile stretch had CHP escorts.

The 9 p.m. opening was eight hours earlier than the anticipated deadline set by the developer.

"We are achieving success and are ahead of schedule," Peter van der Waart van Gulik of Golden Link Concessionaires said optimistically at an afternoon briefing.

All that remained, he said, were safety walk-throughs to make sure there were no lighting or signage issues or hazards that could affect drivers.

The early opening was a relief for Marin commuters who could wake up Monday knowing that the connector to the city's northern waterfront was intact.

Without it, traffic suffered for three days.

"I love waiting on traffic you know?" a driver on Park Presidio commented to KTVU through his car window, "What's better to do on a Sunday?"

The closure began at 10 p.m. Thursday and involved more than 350 workers.

"We excavated about 11,000 cubic yards of dirt, we removed about 1500 tons of old asphalt and replaced it with about 2800 tons of new asphalt, " engineer Adam Mathews of Flatiron Kiewit told reporters. "We also put in about 7000 feet of k-rail and more than 8000 feet of striping.

After several years of driving on a temporary bypass, while the new highway was built, drivers will have new lanes, tunnels and exits to get used to.

"People are excited about it, I'm sure," driver Leon Chalmers of Eureka told KTVU as he pumped gas on 19th Avenue. "I will be driving on it in the morning to go north to home, and that should be a lot of fun."

"Hopefully it's more efficient as far as traffic flow," chimed in driver Adam Chau of San Francisco, "and they've been working on it for so many years, I'm glad it's finally done."

The 1.1 billion dollar parkway replaces infamous Doyle Drive. Narrow, with no shoulders and oncoming traffic separated only by plastic pylons, it was long regarded as outdated, dangerous and at risk of collapse in an earthquake.

Work on the new design was launched in 2009.

The 71 hour closure over the weekend funneled traffic onto surface streets around the Presidio and Highway 1, and snarled the Marina district.

Getting into the city from Marin, across the Golden Gate Bridge, was also taking an hour at peak times.

"Even though we had delays, they weren't nearly as bad as we anticipated," observed CHP Officer Andrew Barclay. "From our standpoint, that's a success."

Construction work will continue at the site well into 2016.

"We have several months of work, demolishing the detour, excavating all the asphalt, and ripping all that out, then building some new connector roads, and landscaping," detailed van der Waart van Gulik.

But those projects shouldn't cause any further driving disruptions.

100,000 vehicles use the corridor every weekday.