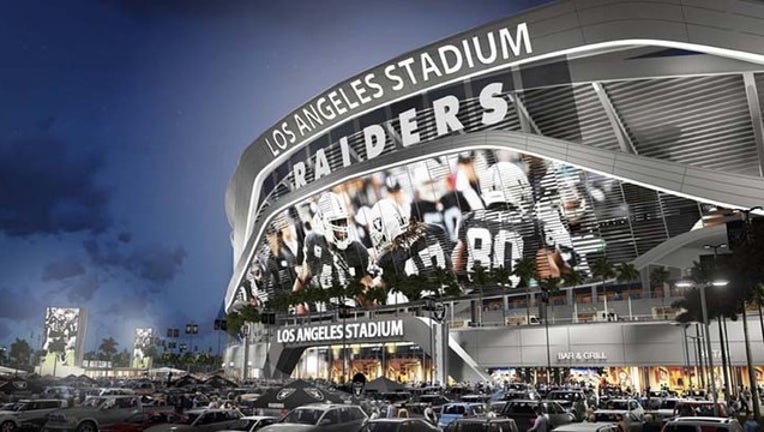 The thoroughly revamped plans for the $1.7 billion joint stadium proposal by the two teams were released Thursday, just two months after the project and an initial set of designs were announced and two days after it received approval from the Carson City Council.

The designs were presented in New York this week to NFL Commissioner Roger Goodell and the league's committee on possibly relocating a team to greater Los Angeles.

The flowing, metallic modern stadium design features a horseshoe-shaped seating arrangement that is open on one end.

"We wanted the building to be iconic and sleek, like a luxury sports car," David Manica, president of stadium designer Manica Architecture, told the Los Angeles Times, which first reported on the revamped design. "Very aerodynamic, in motion, flowing lines from every angle."

Its primary feature is a tower about 120 feet tall that will give off lightning bolts during Chargers games. It will feature a flaming cauldron in Davis' honor during Raiders games. The architects say it can also become a Lombardi Trophy if the venue hosts a Super Bowl.

The tower is one of several stadium elements that will transform based on which team is playing in it, including the color of the seats, the architects said.

It also features a multilevel high-rise of suites on one side.

But not every element is ultra-modern. It also features a peristyle on one end that echoes the L.A. Memorial Coliseum, former home of the Raiders and Rams and the most storied football venue in the LA area.

"Ownership really wants to celebrate the history and enthusiasm of football in Los Angeles," said Manica, who previously worked for the firm that designed the Texans' stadium in Houston and remodeled the Miami Dolphins' stadium.

Chargers spokesman Mark Fabiani said in a statement that the "new LA stadium vision is the result of two months of close collaboration between the Raiders and Chargers."

The project got a green light Tuesday from the Carson City Council, leaving the next move in the hands of the teams and the NFL.

Another stadium project, whose plans are much further along, is underway in nearby Inglewood and has St. Louis Rams owner Stan Kroenke as a partner.

Under NFL rules, the next opportunity for a team to file to relocate to either stadium would be in January. The move would have to clear a tangle of league hurdles, including getting support from at least 24 of the 32 teams.