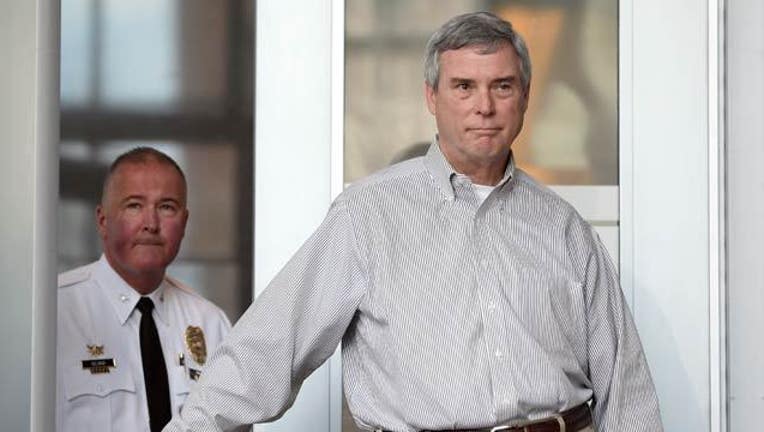 CLAYTON, Mo. (AP) — A 20-year-old man charged Sunday with shooting two police officers who were keeping watch over a demonstration outside the Ferguson Police Department had participated in the protests earlier that night, police said.

St. Louis County Prosecutor Robert McCulloch said Jeffrey Williams told authorities he was firing at someone with whom he was in a dispute, not at the police officers.

"We're not sure we completely buy that part of it," McCulloch said, adding that there might have been other people in the vehicle with Williams.

Williams is charged with two counts of first-degree assault, one count of firing a weapon from a vehicle and three counts of armed criminal action. McCulloch said the investigation is ongoing.

The officers were shot early Thursday as a crowd began to break up after a late-night demonstration that unfolded after Ferguson Police Chief Tom Jackson resigned in the wake of the scathing federal Justice Department report.

"He was out there earlier that evening as part of the demonstration," McCulloch said of Williams.

McCulloch said Williams used a 40mm handgun, which matches the shell casings at the scene.

The north St. Louis County resident was on probation in St. Louis County for receiving stolen property, McCulloch said. "I think there was a warrant out for him on that because he had neglected to report for the last seven months to his probation officer," he said.

Belmar said Thursday that the officers could have easily been killed and called the attack "an ambush."

Attorney General Eric Holder said in a statement Sunday that the arrest "sends a clear message that acts of violence against our law enforcement personnel will never be tolerated" and praised "significant cooperation between federal authorities and the St. Louis County Police Department."

The police department has been a national focal point since the fatal Aug. 9 shooting of Michael Brown, who was black and unarmed, by now-former police officer Darren Wilson. Wilson was cleared by the Justice Department's report and by a county grand jury led by McCulloch.

The federal report found widespread racial bias in the city's policing and in a municipal court system driven by profit extracted from mostly black and low-income residents.

Six Ferguson officials, including Jackson, have resigned or been fired since the federal report was released March 4.