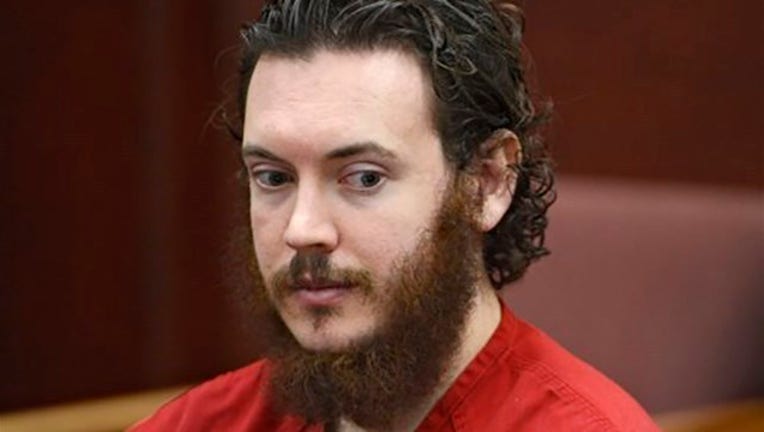 CENTENNIAL, Colo. (AP) — James Holmes was legally sane when he entered a packed movie theater armed with an assault rifle, a shotgun and a pistol, intent on killing as many people as he could, a prosecutor told jurors Tuesday in closing arguments at the gunman's trial.

"That guy was sane beyond a reasonable doubt, and he needs to be held accountable for what he did," District Attorney George Brauchler said.

In his final appeal to jurors before they begin deliberations, Brauchler again stressed the heavy toll on unsuspecting victims who had gone to see the midnight premier of a Batman movie, "The Dark Knight Rises."

"They came in hoping to see the story of a hero dressed in black, someone who would fight insurmountable odds for justice," Brauchler said. "Instead, a different figure appeared by the screen. ... He came there with one thing in his heart and his mind, and that was mass murder."

Many of the victims and family members in the courtroom wept as Brauchler showed photos of the dead and wounded and recounted their stories. Josh Nowlan, who was shot in the leg and walks with a cane, pressed his hands into his eyes and shook.

Jurors showed no emotion but craned their heads toward the gallery when Brauchler said one badly wounded victim, Caleb Medley, was seated there.

Defense attorneys were scheduled to give their closing argument later Tuesday.

Holmes, now 27, does not dispute that he was the lone gunman who attacked the theater but pleaded not guilty by reason of insanity. His attorneys say schizophrenia so warped his mind he could not tell right from wrong, and that he was in the grip of a psychotic episode.

Brauchler told jurors the evidence shows Holmes knew what he was doing was illegal and wrong and that he cannot be considered insane under Colorado law.

The prosecutor methodically reviewed Holmes' elaborate preparations, the horrific attack and finally his decision to surrender when he saw police closing in outside the theater.

"That is logical. That is rational, and that is anything — anything — but psychotic," he said.

He frequently pointed at Holmes, who sat impassively at the defense table, often looking at one of the three video screens in the courtroom.

"He knows it's wrong," Brauchler said at one point. "Wrong for him, wrong for society."

Holmes slipped into the packed theater on July 20, 2012 — almost three years ago — and opened fire. Twelve people died and 70 were injured.

Holmes' parents, Robert and Arlene Holmes, sat on the opposite side of the courtroom from the victims. Seated with them was Bob Autobee, who spoke out against the death penalty when his son, a prison guard, was killed by an inmate. Autobee shook Robert Holmes' hand and hugged Arlene Holmes.

Closing arguments had been scheduled to start earlier in the day but were delayed after the defense said some of the slides prosecutors planned to show jurors were improper. Brauchler defended the images.

Samour ordered Brauchler to change or delete some of the slides, saying they misstated the evidence or made overbroad allegations. The judge allowed Brauchler to keep other slides, including one that referred to Holmes wearing a "kill suit" during the shootings.

Both sides are trying to help jurors make sense of thousands of pieces of evidence and more than 250 witnesses who testified in the 11-week trial. With that information, it will be up to the jury to decide whether prosecutors met their burden of proving Holmes was legally sane.

Two state-appointed forensic psychiatrists who evaluated Holmes determined that he was legally sane, despite severe mental illness. One of the doctors, William Reid, showed jurors nearly 22 hours of sometimes chilling videotaped interviews in which Holmes haltingly describes taking aim at fleeing moviegoers and longing to kill others to increase his own self-worth.

Holmes spent months amassing an arsenal of weapons and body armor. He scrawled detailed plans for the massacre in a spiral notebook, weighing which auditoriums in the Aurora theater complex would allow for maximum carnage.

Holmes also rigged his 800-square-foot apartment into a potentially lethal booby trap that he hoped would divert police and paramedics from the theater as he set about his attack.

Defense attorneys will present Holmes as a struggling neuroscience student who was on the brink of mental collapse well before he acted on increasingly powerful delusions that told him to kill. They called to the stand mental health professionals who analyzed Holmes and found him suffering an array of illnesses, from schizophrenia to full-blown psychosis.

Their strongest witness was Raquel Gur, a nationally known schizophrenia expert who interviewed Holmes for 28 hours and said his thoughts about killing other people became an uncontrollable storm in his mind in the months before the shooting. She and another psychiatrist declared him legally insane. The shooting would not have happened if not for Holmes' psychosis, Gur said.

The doctors said Holmes had struggled with mental illness since childhood, seeking a career in neuroscience to better understand what he described in his notebook as his "broken mind" and a list of self-diagnoses.