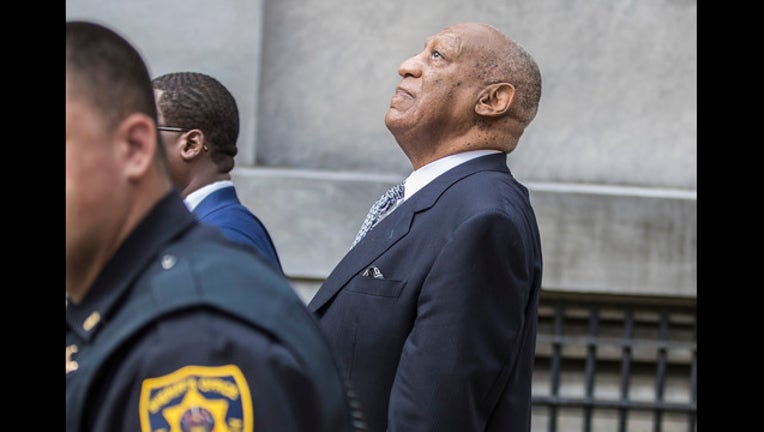 Bill Cosby leans back to listens to words of encouragement from onlookers outside the Montgomery County Courthouse after attending a court hearing pertaining to his new trial in 2018. (Photo by Michael Bryant-Pool/Getty Images)

PHILADELPHIA (AP) - Prosecutors in Bill Cosby's retrial want to call as many as 19 other women to the witness stand to show he had a five-decade pattern of drugging and harming women.

Cosby is due in court for a pretrial hearing Monday, less than two weeks after his daughter's death, as his lawyers clash with prosecutors over how many of his accusers are allowed to testify at his April 2 sexual assault.

Judge Steven O'Neill allowed just one other accuser to take the witness stand at Cosby's first trial, which ended in a hung jury last year. Prosecutors had proposed calling as many as 13. They added six more to the list for the retrial, including model Janice Dickinson.

Cosby's lawyers have said they would seek to delay the retrial if other accusers are given a chance to testify. They said they would need extra time to look into the allegations.

Cosby's lawyers wrote in a court filing that some of the other accusers' allegations date to the 1960s and are "virtually impossible to defend against."

"Developing a defense to any of these outdated claims will require unusual amounts of investigative effort that cannot be completed by the present trial date," the lawyers wrote.

Cosby's 44-year-old daughter, Ensa, died of kidney disease Feb. 23. His lawyers have given no indication they would seek to delay Monday's hearing.

In January, the 80-year-old entertainer was suddenly out and about in his hometown of Philadelphia in what legal experts said was an effort to rebuild his good-guy image. Over a two-week span, Cosby emerged from a long period of near-seclusion to have dinner with friends at a restaurant and to give his first comedy performance in more than two years.

Prosecutors are counting on other accusers testifying to show there was a sinister side to Cosby's public persona as "America's Dad," cultivated through his role as an affable Jell-O pitchman and family sitcom star.

Cosby has pleaded not guilty to charges he drugged and molested former Temple University women's basketball official Andrea Constand at his suburban Philadelphia home. He remains free on bail.

Prosecutors led off Cosby's first trial with testimony from the one other accuser they were allowed to call, Kelly Johnson, who worked for Cosby's agent.

She testified that Cosby knocked her out with a pill during a 1996 meeting at the Bel-Air Hotel. She said she woke up to find her dress disheveled, her breasts exposed and Cosby forcing her to touch his genitals.

Cosby's lawyers argue that the other accusers' largely unsubstantiated accusations aren't enough to meet the strict legal standard for letting prosecutors present evidence of a defendant's prior bad conduct.

They argued that allowing the women to take the witness stand would force the jury make separate determinations about whether Cosby harmed them, devolving his retrial into a series of mini-trials.

The Associated Press does not typically identify people who say they are victims of sexual assault unless they grant permission, which Constand, Johnson and Dickinson have done.