Bush's victory came in a rematch of 2018, when she failed to capitalize on a national Democratic wave that favored political newcomers such as Bush’s friend, Rep. Alexandria Ocasio-Cortez.

But this time around, Bush’s supporters said protests over the death of George Floyd in police custody in Minneapolis and outrage over racial injustice finally pushed her over the edge.

An emotional Bush, speaking to supporters while wearing a mask, said few people expected her to win. 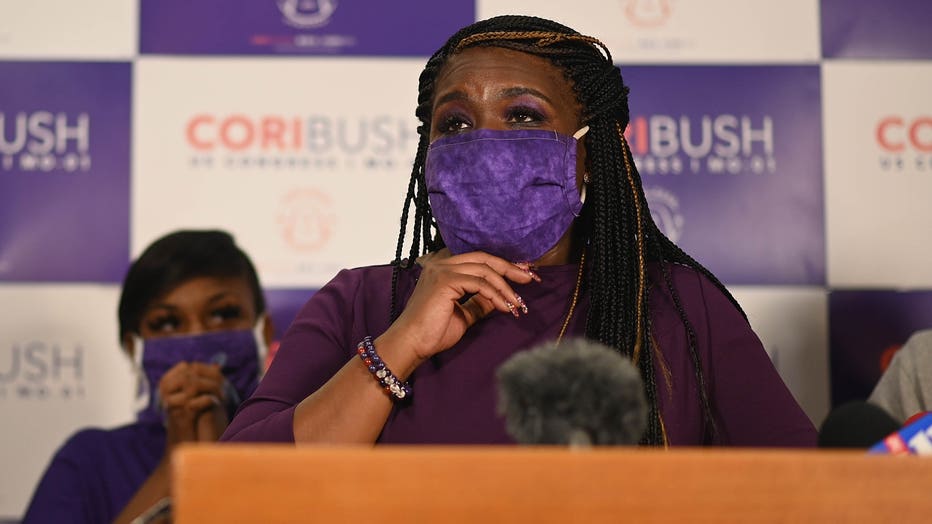 “They counted us out,” she said. “They called me — I'm just the protester, I'm just the activist with no name, no title and no real money. That's all they said that I was. But St. Louis showed up today.”

“They’re ready to turn the page on decades of failed leadership," Korth said.

Bush’s primary win essentially guarantees her a seat in Congress representing the heavily Democratic St. Louis area. Missouri’s 1st Congressional District, which encompasses Ferguson, has been represented by Clay or his father for a half-century. Bill Clay served 32 years before retiring in 2000. William Lacy Clay, 64, was elected that year.

Clay didn't face a serious challenger until Bush. This year, he ran on his decades-long record in Congress.

“This election is a simple choice,” Clay said in a Monday statement. "Cori Bush’s Empty Rhetoric, or my record of real results and real reforms for the people."

Both Clay and Bush are Black, and Black residents slightly outnumber whites in the district that includes St. Louis and north St. Louis County.

Some Black voters skeptical about voting by mail amid pandemic

Many Black voters have expressed doubt over casting their ballots by mail.

Bush became ill while pregnant with her second child in 2001 and had to quit her job at a preschool. When she and her then-husband were evicted from a rental home, the couple, their newborn and 14-month-old son lived out of a Ford Explorer for several months.

Michael Brown’s death in 2014 in Ferguson vaulted her into another role: activist. She became a leader of some of the many protests that followed the fatal police shooting of the Black, unarmed 18-year-old. She was back on the streets in 2017 after a white St. Louis officer was acquitted in the shooting death of a Black suspect.

She continues to lead protests.

“She’s being buoyed by this movement, and the movement’s origin is in Ferguson,” Justice Democrats spokesman Waleed Shahid said.