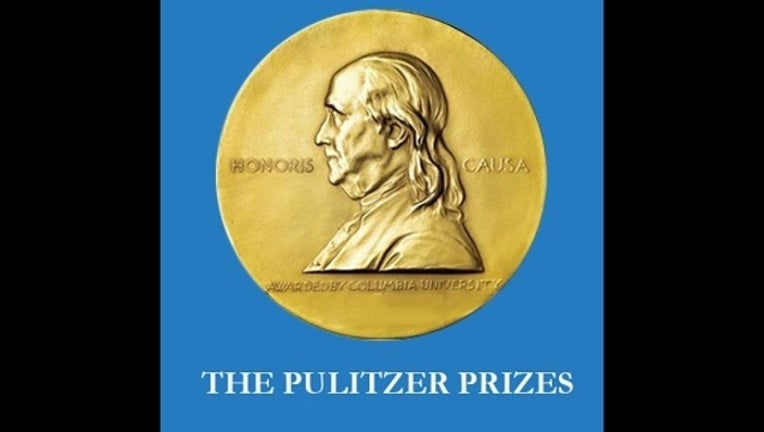 NEW YORK (AP) -- The biggest U.S. news story of 2016 -- the tumultuous presidential campaign -- yielded a Pulitzer Prize on Monday for the Washington Post reporter who not only raised doubts about Donald Trump's charitable giving but also revealed that the candidate had been recorded crudely bragging about grabbing women.

David A. Fahrenthold won the prize for national reporting, with the judges citing stories that examined Trump's charitable foundation and called into question whether the real estate magnate was as generous as he claimed.

Fahrenthold's submission also included his story about Trump's raunchy behind-the-scenes comments during a 2005 taping of "Access Hollywood." The footage rocked the White House race and prompted a rare apology from the then-candidate.

In another election-related prize, Peggy Noonan of The Wall Street Journal won the Pulitzer for commentary for columns that "connected readers to the shared virtues of Americans during one of the nation's most divisive political campaigns."

The judges said Fahrenthold's reporting "created a model for transparent journalism," a model he built partly by using Twitter to publicize his efforts and let Trump see what he was doing. The president "can expect to see more of me on Twitter," said Fahrenthold, now part of a team looking at Trump businesses.

The New York Daily News and ProPublica won the Pulitzer in public service for uncovering how authorities used an obscure law, originally enacted to crack down on prostitution in Times Square in the 1970s, to evict hundreds of people, mostly poor minorities, from their homes.

"Thanks to this investigation, New York now sees how an extremely muscular law, combined with aggressive policing, combined with a lack of counsel, combined with lax judges produced damaging miscarriages of justice," Daily News Editor in Chief Arthur Browne said. The Daily News reporter credited with most of the work was Sarah Ryley.

ProPublica's managing editor, Robin Fields, said the project was "the type of collaboration that ProPublica had in mind" when the independent, nonprofit organization was launched nine years ago.

The New York Times' staff received the international reporting award for its work on Russian President Vladimir Putin's efforts to project Moscow's power abroad. The award in feature writing went to the Times' C.J. Chivers for a story about a Marine's descent into violence after returning home from war.

Cullen said he was stunned by the win. "Nobody's ever heard of us before," he said with a laugh.

The prize for explanatory reporting went to the International Consortium of Investigative Journalists, McClatchy and the Miami Herald, which amassed a group of over 400 journalists to examine the leaked "Panama Papers" and expose the way that politicians, criminals and rich people stashed money in offshore accounts.

Meanwhile, the Herald's Jim Morin won the award for editorial cartooning. He also won in 1996.

The staff of the East Bay Times in Oakland, California, received the breaking news reporting award for its coverage of a fire that killed 36 people at a warehouse party and for its follow-up reporting on how local officials hadn't taken action that might have prevented it.

Executive Editor Neil Chase said the award was "tremendously humbling," but "you have to pause and realize that 36 people died in the fire, and this story should have never happened."

The staff of The Salt Lake Tribune received the local reporting award for its work on how Brigham Young University treated sexual assault victims. The series prompted the Mormon school to stop conducting honor code investigations into students who reported being sexually assaulted.

Hilton Als, a theater critic for The New Yorker, won in the criticism category. The judges praised how he strove to connect theater to the real-world, "shifting landscape of gender, sexuality and race."

Freelancer Daniel Berehulak received the breaking news photography award for his images, published in The New York Times, documenting Philippine President Rodrigo Duterte's crackdown on drug dealers and users. Berehulak won the feature photography Pulitzer in 2015 for his work on the Ebola outbreak in Africa.

This year's feature photography winner was E. Jason Wambsgans of the Chicago Tribune, for his portrayal of a 10-year-old boy who had been shot.

The Pulitzers are awarded at Columbia University and handed out in 14 categories of reporting, photography, criticism and commentary by newspapers, magazines and websites.

Amid concern about fake news and the role of the media, "it's just a very important time to try to help people see the importance of great journalism in their lives and in the democracy," prize administrator Mike Pride said.

Arts prizes are awarded in seven categories, including fiction, drama and music. Among the arts winners, Colson Whitehead took the fiction prize for "The Underground Railroad," a novel that combined flights of imagination with the grimmest and most realistic detail of 19th-century slavery. Playwright Lynn Nottage won her second drama Pulitzer, for "Sweat."

This is the 101st year of the contest, established by newspaper publisher Joseph Pulitzer. Public service award winners receive a gold medal; the other awards carry a prize of $15,000 each.